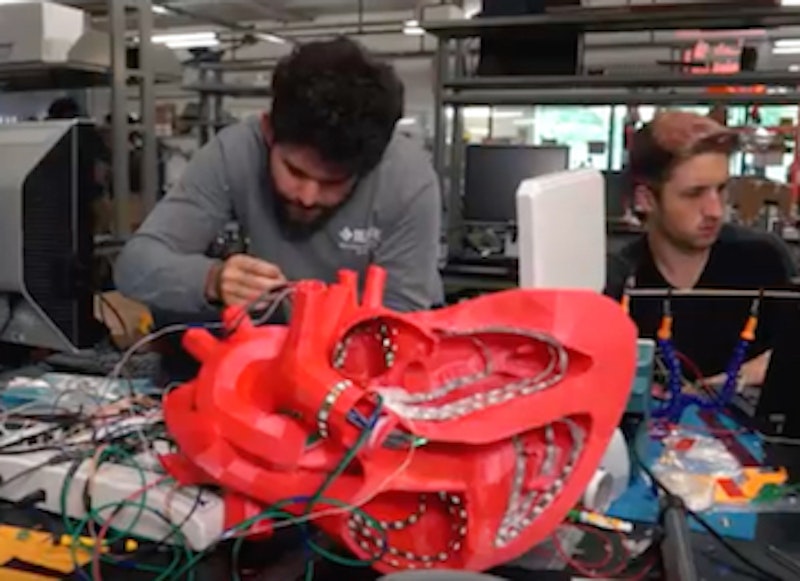 The Love and Pace team of Rice University electrical and computer engineering seniors demonstrated its design for a pacemaker that would place a network of chips the size of a grain of rice in various places inside the heart. These would communicate with a base station located under a patient's skin and charge via radio frequency. For more information see the IDTechEx reports on wearable technology and battery elimination in electronics
When the base station senses a problem with the heart's rhythm, it would automatically trigger the embedded chips to release a jolt of energy timed to re-establish the heart's normal rhythm.
Different forms of wireless and leadless pacemakers have come onto the market in recent years to replace the status quo, a pulse generator located in a patient's chest and connected to the heart via one to three wired stimulus and sensing leads.
Former Rice faculty member Aydin Babakhani and his Texas Medical Center colleagues introduced their concept for a more advanced wireless pacemaker last year that could be embedded in the heart and charged via radio frequency energy harvesting.
The students' concept aims to build on that technology by establishing an entire network inside the heart. "The current (commercial) leadless solution is a bullet-sized pacemaker with a battery that is installed inside the heart," said team member Yoseph Maguire. "It is effective only in pacing a single chamber of the heart."
The concept by Maguire and his fellow electrical and computer engineering students - Chris Chivetta, Yixin Chen, Cody Tapscott, Ricky Chen and June Chen - would use millimeter-scale chips that would be permanently embedded within the heart.
They developed their ideas with the help of faculty advisers Joseph Cavallaro, a professor of electrical and computer engineering, and Gary Woods, a professor in the practice of computer technology and electrical and computer engineering, along with Texas Heart Institute cardiologists Dr. Mehdi Razavi and Dr. Brian Greet. Behnaam Aazhang, a professor of electrical and computer engineering, and Yingyan Lin, a Texas Instruments visiting research assistant professor of electrical and computer engineering, contributed to the machine learning and sensing aspects of the project.
The team's demo system consisted of a 3-D printed heart with light traces triggered by programmed anomalies and sensor-simulator chips that detected the problems and sent data to the base station. The station then commanded the stimulators to release timed jolts to adjust the heart's rhythm.
The team knows the demo is only the first step in a long process that will continue with future teams at the Oshman Engineering Design Kitchen through a Rice program known as VIP (for Vertically Integrated Projects). When Rice mentors anticipate projects are too complex for one team to handle in an academic year and are deemed important enough to put in the extra time and effort, they are passed to another set of students.
The pacemaker project certainly fits that description. "The heart is a very unique and harsh environment for circuitry," Maguire said. "Having it all integrated is a huge research task, so for us, just developing a proof-of-concept is enough."
Because there are no wires, the control unit continually dribbles power to and gathers data from the heart-embedded chips through radio frequency radiation, the same technology found in common RFID tags, Maguire said. The chips would deliver 25 nanojoule charges to stimulate heart muscles.
"It's a master-slave network," Maguire said. "Once you have these chips positioned within the heart and covered over by scar tissue, they would communicate with the aggregator — a bigger board that has an RFID reader, takes in all the data, processes it and relays it back to the chips. If things aren't working out well in the heart, the aggregator would say, 'Hey, guys, I need you to pace.' They would continuously pace until the aggregator observed that things are good in all the chambers."
Tapscott said that kind of network could become common as doctors seek better ways to gather real-time information from within their patients' bodies.
Source and top image: Rice University
Learn more at the next leading event on the topic: Healthcare Sensor Innovations USA 2020