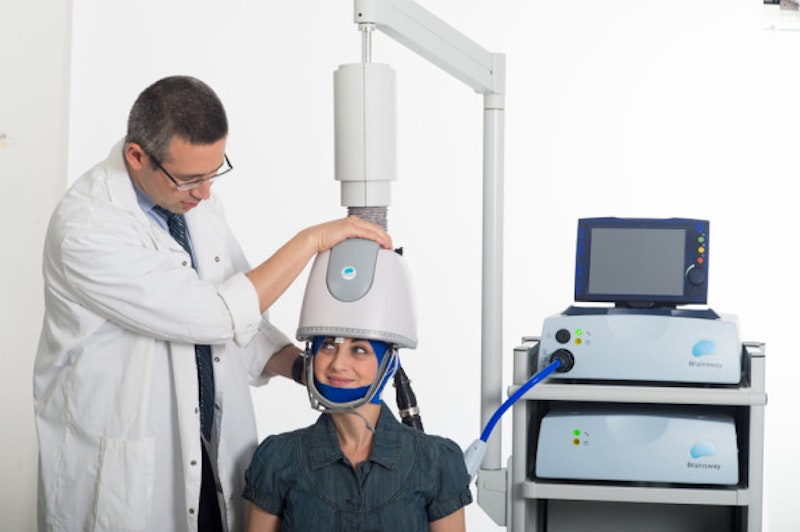 BrainsWay Ltd, the parent company of BrainsWay USA Inc. and a leader in the advanced non-invasive treatment of brain disorders, announces that it has received De Novo clearance from the U.S. Food and Drug Administration (FDA) for its deep transcranial magnetic stimulation (Deep TMS) system for the treatment of obsessive-compulsive disorder (OCD) in adults. For more information see the IDTechEx report on Digital Health 2018.
This clearance represents the first ever non-invasive medical device clearance for the treatment of OCD, and the second indication granted for BrainsWay Deep TMS, which was cleared in 2013 for the treatment of treatment-resistant major depressive disorder (MDD). BrainsWay intends to start installing BrainsWay OCD immediately as an upgrade of its current systems and as part of new installations. Clinics that have or will have a Deep TMS systems can now treat MDD and OCD patients.
"With the clearance of our BrainsWay OCD device, we are now able to provide an effective and safe treatment option for U.S. patients who are suffering from OCD," said Yaacov Michlin, president and chief executive officer of BrainsWay. "With more than two million U.S. adults suffering from OCD, this clearance provides us with a significant market opportunity. Importantly, this clearance further establishes Deep TMS as a platform technology that will provide treatments for additional psychiatric indications, subject to successful completion of our currently ongoing multi center studies and regulatory approvals."
BrainsWay's Deep TMS technology differs from that of other focal TMS devices as it has broad applicability and can directly stimulate areas of the brain at a greater depth and breadth than any other TMS device on the market safely and efficiently. While other focal TMS devices are limited to treating MDD, BrainsWay can now directly target previously unreachable areas of the brain with its proprietary H7-coil, allowing it to effectively treat OCD as well.
Dr. Joseph Zohar, professor of psychiatry at the Sackler Faculty of Medicine at Tel Aviv University, chair, International College of Obsessive-Compulsive Spectrum Disorders (ICOCS) and principal pivotal trial investigator, added, "The clearance of BrainsWay's OCD device marks a historic milestone in the treatment of this neurological disorder. This is a new groundbreaking treatment option for patients looking for a meaningful and potentially life-changing solution for OCD."
Prof. Abraham Zangen, a scientific founder and a neurobiological consultant for BrainsWay said, "The brain region targeted with the BrainsWay H7- coil is the anterior cingulate cortex, a region known for many years to be centrally implicated in the pathophysiology of OCD. This Deep TMS H7-coil is different from the BrainsWay H1-coil used for treating depression that targets primarily the lateral pre-frontal cortex. The modulation of the anterior cingulate cortex induced by BrainsWay's special H7- coil, combined with the individualized provocation procedure in addition to the continued pharmacological or psychological treatment, will allow effective treatment for millions of OCD patients."
About the Pivotal Study
BrainsWay's FDA clearance for its OCD treatment was based on a pivotal, multicenter study demonstrating that after six weeks of treatment, there was a statistically significant improvement in the primary endpoint results for the active treatment group when compared to sham (p=0.0127). The improvement was maintained when measured again in a single follow up meeting with the patients one month after the end of treatment at week 10. The primary outcome measure of this study was the OCD Yale-Brown Obsessive-Compulsive Scale (Y-BOCS), the gold standard measure of OCD symptoms severity. Importantly, 38.1% of patients in the active group achieved a response of more than 30% reduction in symptoms severity as measured by Y-BOCS, compared with just 11.1% in the sham group (p=0.0033). Moreover, 54.8% of patients in the active group achieved a partial response of more than 20% reduction in symptoms severity, versus just 26.7% in the sham group (p=0.0076).
The study was conducted in a total of 11 medical centers, with nine located in the United States, one in Canada and one in Israel. Patients who did not sufficiently respond to pharmacological or psychological treatment were enrolled in the trial and continued their pharmacological or psychological treatment during the study. The BrainsWay OCD treatment protocol consisted of twenty-minute sessions conducted five times per week, over the course of six weeks. Importantly, a tailored provocation was applied in each session to personalize the treatment for the patients' specific disorder. Deep TMS treatment is non-invasive, requires no anesthesia and has been demonstrated to be safe and well-tolerated.
OCD is a severe, chronic psychiatric disease characterized by a pattern of obsessive thoughts and compulsive repetitive behaviors, which has a significantly destructive effect on patients' day-to-day activities. Current treatment options include SSRI antidepressant medications, which must be given at very high doses for OCD patients, cognitive-behavioral treatment (CBT), or a combination of these treatment options. OCD is very difficult to treat since many patients do not respond to pharmacologic or CBT treatment, and many have difficulty tolerating the side effects of the pharmacological treatment.
Source: BrainsWay Ltd
Top image: Advanced Mental Health Care Inc
Learn more at the next leading event on the topic: Healthcare Sensor Innovations USA 2020