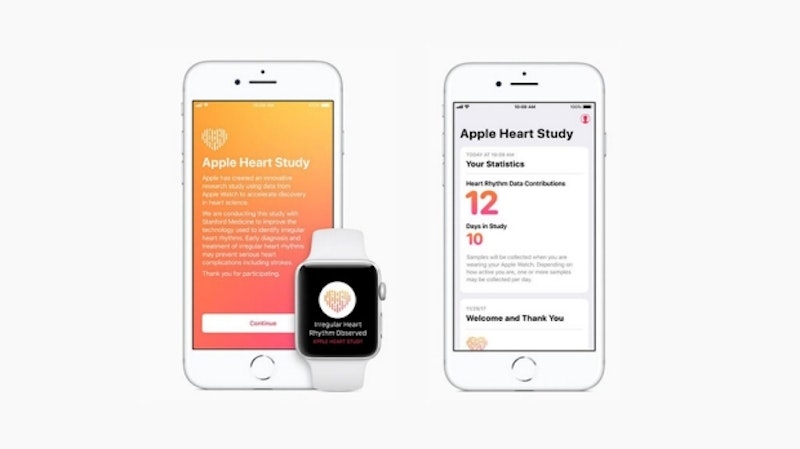 Researchers from the Stanford University School of Medicine have presented preliminary results of the Apple Heart Study, an unprecedented virtual study with over 400,000 enrolled participants. The researchers reported that wearable technology can safely identify heart rate irregularities that subsequent testing confirmed to be atrial fibrillation, a leading cause of stroke and hospitalization in the United States. For more information see the IDTechEx report on Wearable Sensors 2018-2028.
The study was launched with sponsorship by Apple Inc. in November 2017 to determine whether a mobile app that uses data from a heart-rate pulse sensor on the Apple Watch can identify atrial fibrillation. The condition often remains hidden because many people don't experience symptoms.
Key findings from the study include:
"The results of the Apple Heart Study highlight the potential role that innovative digital technology can play in creating more predictive and preventive health care," said Lloyd Minor, MD, dean of the Stanford School of Medicine. "Atrial fibrillation is just the beginning, as this study opens the door to further research into wearable technologies and how they might be used to prevent disease before it strikes — a key goal of precision health."
For the study, each participant was required to have an Apple Watch (series 1, 2 or 3) and an iPhone. The most recent Apple Watch, which features a built-in ECG, wasn't part of the study, as it was released after the study's launch. The Apple Heart Study app intermittently checked the heart-rate pulse sensor for measurements of an irregular pulse. If an irregular pulse was detected, the participant received a notification and was asked to schedule a telemedicine consultation with a doctor involved in the study through American Well. Participants were then sent ambulatory ECG patches through BioTelemetry, which recorded the electrical rhythm of their hearts for up to a week.
The Stanford principal investigators were Mintu Turakhia, MD, associate professor of cardiovascular medicine, and Marco Perez, MD, associate professor of cardiovascular medicine, and the study chair was Kenneth Mahaffey, MD, professor of cardiovascular medicine.
"The study's findings have the potential to help patients and clinicians understand how devices like the Apple Watch can play a role in detecting conditions such as atrial fibrillation, a deadly and often undiagnosed disease," said Turakhia. /"The virtual design of this study also provides a strong foundation upon which future research can be conducted to explore the health implications of wearable technology."
"The performance and accuracy we observed in this study provides important information as we seek to understand the potential impact of wearable technology on the health system," said Perez. "Further research will help people make more informed health decisions."
Researchers from the Lankenau Heart Institute, Jefferson Medical College, the University of Colorado School of Medicine, Cooper Medical School of Rowan University, StopAfib.org, the American Foundation for Women's Health and Duke University also contributed to the study.
The Apple Heart Study was funded by Apple Inc.
Source and top image: Stanford University