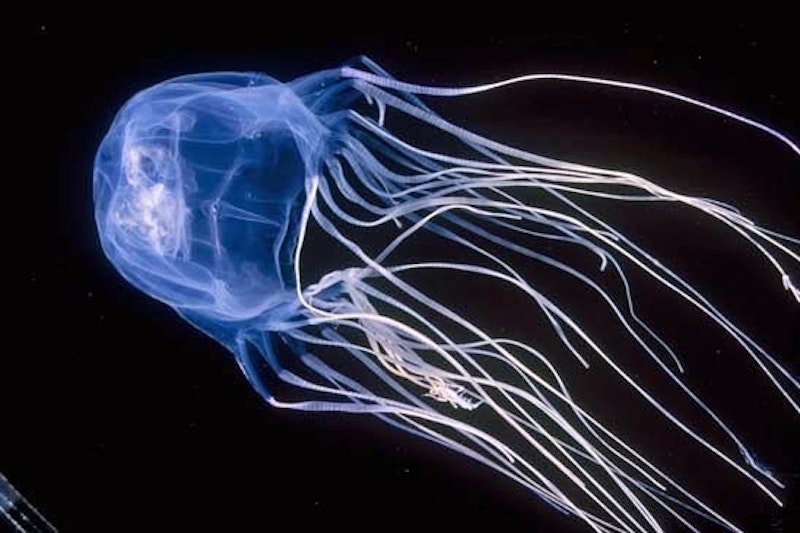 Researchers at the University of Sydney have discovered an antidote to the deadly sting delivered by the most venomous creature on earth - the Australian box jellyfish. The Australian box jellyfish (Chironex fleckeri) has about 60 tentacles that can grow up to three metres long. Each tentacle has millions of microscopic hooks filled with venom. For more information see the IDTechEx report on Synthetic Biology 2018.
Each box jellyfish carries enough venom to kill more than 60 humans. A single sting to a human will cause necrosis of the skin, excruciating pain and, if the dose of venom is large enough, cardiac arrest and death within minutes.
Associate Professor Greg Neely and Dr Raymond (Man-Tat) Lau and their team of pain researchers at the Charles Perkins Centre at University of Sydney were studying how the box jellyfish venom works when they made the discovery. They uncovered a medicine that blocks the symptoms of a box jellyfish sting if administered to the skin within 15 minutes after contact. The antidote was shown to work on human cells outside the body and then tested effectively on live mice. Researchers now hope to develop a topical application for humans.
"We were looking at how the venom works, to try to better understand how it causes pain. Using new CRISPR genome editing techniques we could quickly identify how this venom kills human cells. Luckily, there was already a drug that could act on the pathway the venom uses to kill cells, and when we tried this drug as a venom antidote on mice, we found it could block the tissue scarring and pain related to jellyfish stings," said Associate Professor Neely. "It is super exciting."
Published in the prestigious journal Nature Communications today, the study used CRISPR whole genome editing to identify how the venom works. Genome editing is a technology that allows scientists to add, remove or alter genetic material in an organism's DNA.
In the study, the researchers took a vat of millions of human cells and knocked out a different human gene in each one. Then they added the box jellyfish venom - which kills cells at high doses - and looked for cells that survived. From the whole genome screening, the researchers identified human factors that are required for the venom to work.
"The jellyfish venom pathway we identified in this study requires cholesterol, and since there are lots of drugs available that target cholesterol, we could try to block this pathway to see how this impacted venom activity. We took one of those drugs, which we know is safe for human use, and we used it against the venom, and it worked," said Dr Lau, who is the lead author on the paper. "It's a molecular antidote."
"It's the first molecular dissection of how this type of venom works, and possible how any venom works," Dr Lau said. "I haven't seen a study like this for any other venom."
"We know the drug will stop the necrosis, skin scarring and the pain completely when applied to the skin," said Associate Professor Neely, who is the senior author on the paper. "We don't know yet if it will stop a heart attack. That will need more research and we are applying for funding to continue this work."
Found in coastal waters in northern Australia and into the waters around the Philippines, the box jellyfish is extremely dangerous. They don't just float, they can actively swim, gaining speed of 7.5 kilometres an hour when they are hunting. They feed in shallow waters, mainly small fish and prawns. There are two types of box jellyfish, the Irukandji, which is tiny, and the Chironex fleckeri, which is about three metres long. "We studied the biggest, most venomous and scary one," said Associate Professor Neely. "Our drug works on the big beast. We don't know yet if it works on other jellyfish, but we know it works on the most-deadly one."
The venom used in the study was collected from a box jellyfish off the waters of Cairns by Associate Professor Jamie Seymour at James Cook University.
Anecdotal evidence suggests the only current treatment for a sting is dousing the area with vinegar for 30 seconds or running very hot water over the affected area for 20 minutes. If it's a major sting, continuous CPR is needed to keep the heart beating.
"Our antidote is a medicine that blocks the venom," said Associate Professor Neely. "You need to get it onto the site within 15 minutes. In our study, we injected it. But the plan would be a spray or a topical cream. The argument against a cream is when you are stung it leaves lots of little stingers in you so if you rub the cream on it might be squeezing more venom into you. But if you spray, it could neutralise what's left outside of your body."
Associate Professor Neely and his team are now looking for potential partners to work on making the medicine available to the public. Associate Professor Neely's team work in functional genomics and study chronic pain at the Charles Perkins Centre and he heads the Sydney Genome Editing Initiative at the University of Sydney. They are studying a range of deadly Australian creatures - the box jellyfish, and a wide variety of other venomous animals - in order to understand what causes pain.
In 2018, pain and chronic pain cost $139 billion to the Australian economy and is heading towards $215 billion by 2050, according to Pain Australia.
"Most of our work is directed at developing non-addictive pain killers for humans," said Associate Professor Neely. "One way we do this is to figure out how painful venoms from Australian creatures work using brand new CRISPR technology. It is super cool."
Source: University of Sydney
Top image: Box Jellyfish Org
Learn more at the next leading event on the topic: Healthcare Sensor Innovations USA 2020