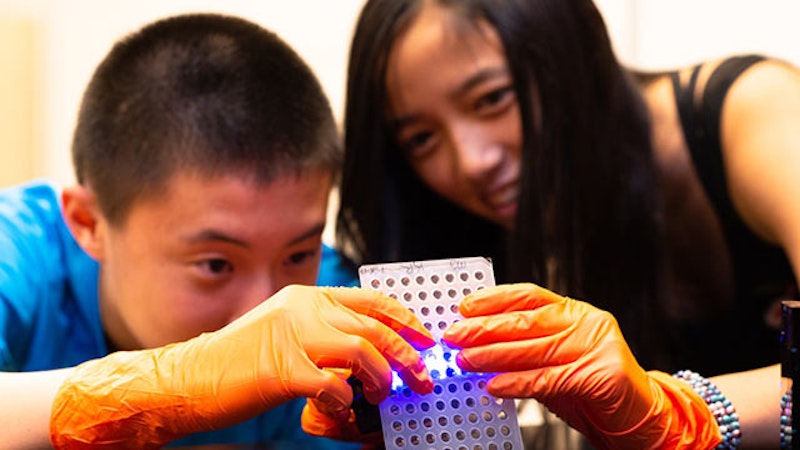 How can high school students learn about a technology as complex and abstract as CRISPR? It's simple: just add water.
A Northwestern University-led team has developed BioBits, a suite of hands-on educational kits that enable students to perform a range of biological experiments by adding water and simple reagents to freeze-dried cell-free reactions. The kits link complex biological concepts to visual, fluorescent readouts, so students know — after a few hours and with a single glance — the results of their experiments. After launching BioBits last summer, the researchers are now expanding the kit to include modules for CRISPR and antibiotic resistance. A small group of Chicago-area teachers and high school students just completed the first pilot study for these new modules, which include interactive experiments and supplementary materials exploring ethics and strategies. For more information see the IDTechEx report on Synthetic Biology 2018.
"After we unveiled the first kits, we next wanted to tackle current topics that are important for society," said Northwestern's Michael Jewett, principal investigator of the study. "That led us to two areas: antibiotic resistance and gene editing." Jewett is a professor of chemical and biological engineering in Northwestern's McCormick School of Engineering and co-director of Northwestern's Center for Synthetic Biology. Jessica Stark, a graduate student in Jewett's laboratory, led the study.
Instead of using live cells, the BioBits team removed the essential cellular machinery from inside the cells and freeze-dried them for shelf stability. Keeping cells alive and contained for an extended period of time involves several complicated, time-consuming preparation and processing steps as well as expensive equipment. Freeze-dried cell-free reactions bypass those complications and costs.
"These are essentially test-tube biological reactions," said Stark, a National Science Foundation graduate research fellow. "We break the cells open and use their guts, which still contain all of the necessary biological machinery to carry out a reaction. We no longer need living cells to demonstrate biology."
This method to harness biological systems without intact, living cells became possible over the last two decades thanks to multiple innovations, including many in cell-free synthetic biology by Jewett's lab. Not only are these experiments doable in the classroom, they also only cost pennies compared to standard high-tech experimental designs.
"I'm hopeful that students get excited about engineering biology and want to learn more," Jewett said.
One of the biggest scientific breakthroughs of the past decade, CRISPR (pronounced "crisper") stands for Clustered Regularly Interspaced Short Palindromic Repeats. The powerful gene-editing technology uses enzymes to cut DNA in precise locations to turn off or edit targeted genes. It could be used to halt genetic diseases, develop new medicines, make food more nutritious and much more.
BioBits Health uses three components required for CRISPR: an enzyme called the Cas9 protein, a target DNA sequence encoding a fluorescent protein and an RNA molecule that targets the fluorescent protein gene. When students add all three components — and water — to the freeze-dried cell-free system, it creates a reaction that edits, or cuts, the DNA for the fluorescent protein. If the DNA is cut, the system does not glow. If the DNA is not cut, the fluorescent protein is made, and the system glows fluorescent.
"We have linked this abstract, really advanced biological concept to the presence or absence of a fluorescent protein," Stark said. "It's something students can see, something they can visually understand."
The curriculum also includes activities that challenge students to consider the ethical questions and dilemmas surrounding the use of gene-editing technologies.
"There is a lot of excitement about being able to edit genomes with these technologies," Jewett said. "BioBits Health calls attention to a lot of important questions — not only about how CRISPR technology works but about ethics that society should be thinking about. We hope that this promotes a conversation and dialogue about such technologies."
Jewett and Stark are both troubled by a prediction that, by the year 2050, drug-resistant bacterial infections could outpace cancer as a leading cause of death. This motivated them to help educate the future generation of scientists about how antibiotic resistance emerges and inspire them to take actions that could help limit the emergence of resistant bacteria.
In this module, students run two sets of reactions to produce a glowing fluorescent protein — one set with an antibiotic resistance gene and one set without. Students then add antibiotics. If the experiment glows, the fluorescent protein has been made, and the reaction has become resistant to antibiotics. If the experiment does not glow, then the antibiotic has worked.
"Because we're using cell-free systems rather than organisms, we can demonstrate drug resistance in a way that doesn't create drug-resistant bacteria," Stark explained. "We can demonstrate these concepts without the risks." A supporting curriculum piece challenges students to brainstorm and research strategies for slowing the rate of emerging antibiotic resistant strains.
After BioBits was launched in summer 2018, 330 schools from around the globe requested prototype kits for their science labs. The research team, which includes members from Northwestern and MIT, has received encouraging feedback from teachers, students and parents.
Source and top image: Northwestern University
Learn more at the next leading event on the topic: Healthcare Sensor Innovations USA 2020