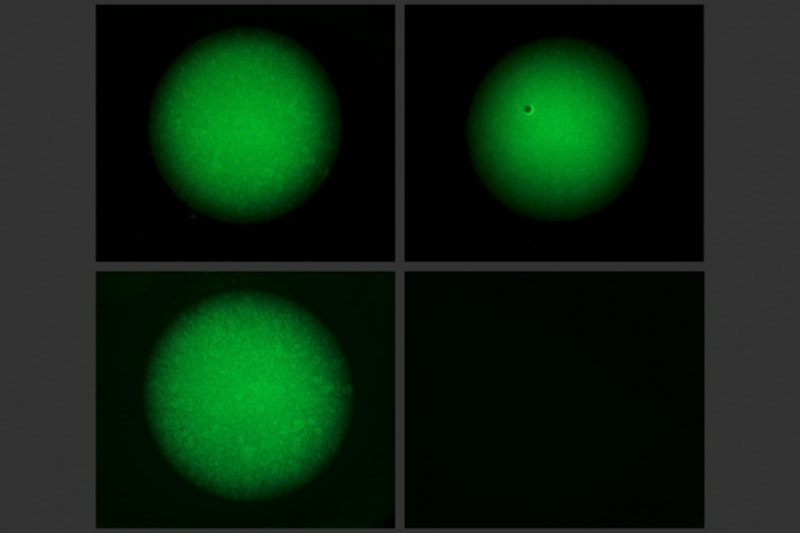 The CRISPR genome-editing system is best-known for its potential to correct disease-causing mutations and add new genes into living cells. Now, a team from MIT and Harvard University has deployed CRISPR for a completely different purpose: creating novel materials, such as gels, that can change their properties when they encounter specific DNA sequences. For more information see the IDTechEx report on Synthetic Biology 2018.
The researchers showed they could use CRISPR to control electronic circuits and microfluidic devices, and to release drugs, proteins, or living cells from gels. Such materials could be used to create diagnostic devices for diseases such as Ebola, or to deliver treatments for diseases such as irritable bowel disease.
"This study serves as a nice starting point for showing how CRISPR can be utilized in materials science for a really wide range of applications," says James Collins, the Termeer Professor of Medical Engineering and Science in MIT's Institute for Medical Engineering and Science (IMES) and Department of Biological Engineering, and the senior author of the study.
DNA interactions
CRISPR is based on DNA-cutting proteins called Cas enzymes, which bind to short RNA guides that direct them to specific areas of the genome. Cas cuts DNA in those locations, deleting a gene or allowing new genetic sequences to be introduced.
Over the past several years, much research has been devoted to developing CRISPR as a gene-editing tool for treating disease by cutting out or repairing faulty genes. The MIT and Harvard team set out to adapt it for creating materials that could respond to external cues such as the presence of a certain sequence of DNA.
For this work, they used an enzyme known as Cas12a, which can be programmed to bind to specific sequences of double-stranded DNA by simply changing the guide RNA sequence that is given along with the enzyme. Once Cas12a encounters a target DNA sequence, also called a trigger, it cleaves the double-stranded DNA and transforms into an enzyme that can slice any single-stranded DNA it encounters.
"By incorporating DNA into materials, you can use this enzyme to control the properties of the materials in response to a specific biological cue in the environment," English says.
The researchers took advantage of this to design gels that incorporate single-stranded DNA in key functional or structural roles. In one example, they created a gel made of polyethylene glycol (PEG) and used DNA to anchor enzymes or other large biomolecules to the gel. When activated by a trigger sequence, Cas12a cuts the DNA anchors, releasing the payload.
That type of gel could be useful for releasing therapeutic compounds such as drugs or growth factors, the researchers say. In another example, they created an acrylamide gel in which single-stranded DNA forms an integral part of the gel structure. In that case, when Cas12a is activated by the trigger, the entire gel breaks down, enabling the release of larger cargoes such as cells or nanoparticles.
"In that context, we consider the single-stranded DNA as a structural scaffold," Gayet says. "The enzyme is able to catalyze the cleavage of the single-stranded DNA, which acts as a structural linker, and release all of those molecules."
The researchers are now exploring the possibility of using this approach to deliver engineered bacterial cells to help treat gastrointestinal diseases.
Inexpensive diagnostics
The researchers also created two CRISPR-controlled diagnostic devices, one based on an electronic circuit and the other on a microfluidic chip.
To create the electronic circuit, the researchers designed a gel that includes single-stranded DNA and a material called carbon black, which conducts electricity. When attached to the surface of an electrode, this conductive gel allows electrical current to flow. However, if Cas12a is activated by a trigger sequence, such as a strand of viral DNA from a blood sample, the gel becomes detached from the electrode and current stops flowing.
For their microfluidic sensor, the researchers created a DNA-containing gel that acts as a valve that controls the flow of a solution through the microfluidic channel. If the solution contains a blood sample with a target DNA sequence, the gel breaks down, turning off the valve, and the solution stops flowing. This microfluidic sensor can be connected to an RFID chip, allowing it to wirelessly transmit the results of the test.
"A health care worker can be monitoring dozens of patients, and the presence or absence of the Ebola trigger will automatically relay a binary signal," Soenksen says.
While the researchers used fluid samples containing Ebola virus RNA to test this approach, it could also be adapted to detect other infectious diseases, as well as cancer cells circulating in a patient's bloodstream.
Philip LeDuc, a professor of mechanical engineering at Carnegie Mellon University, describes the work as "tremendously creative. "This is a very non-obvious intersection of two different fields, and the influence of this work will be far-reaching," says LeDuc, who was not involved in the study. "This transdisciplinary work may enable an entire new generation of approaches for applications from building artificial organs to improving the environment."
The research was funded by the Defense Threat Reduction Agency, the Paul G. Allen Frontiers Group, and the Wyss Institute for Biologically Inspired Engineering at Harvard University.
Source and top image: MIT
Learn more at the next leading event on the topic: Healthcare Sensor Innovations USA 2020