Leg amputees feel and use the prosthesis as a real limb 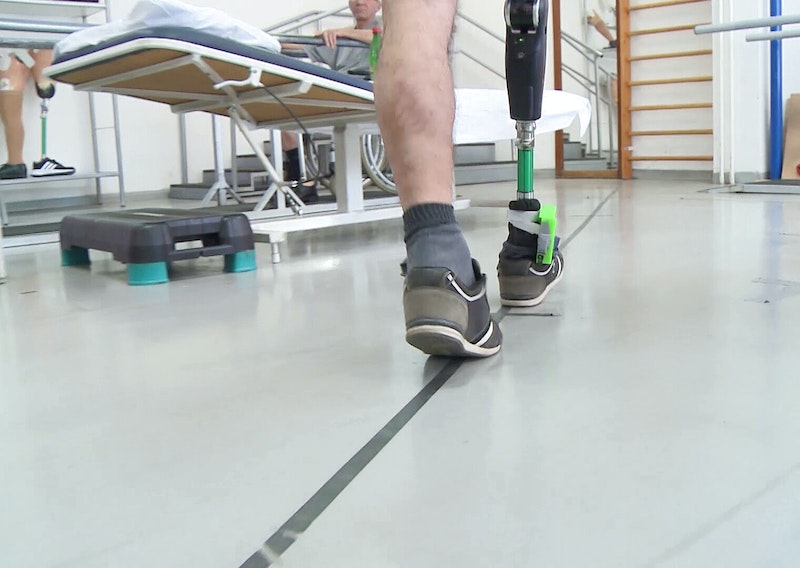 Tiny electrodes implanted in the patients' thigh nerve allow them to feel natural sensations of touch and movement from the prosthesis. Therefore, the amputees can walk freely while thinking about different activities other than controlling the device. The details of the work were published in the 2 October issue of Science Translation Medicine and represent a multidisciplinary collaboration among several European institutions. For more information see the IDTechEx report on Neuroprosthetics 2018-2028: Technologies, Forecasts, Players.
"First time that I feel my leg, my foot," reports Djurica Resanovic, one of the volunteers. "It was very interesting, like my own leg, after several years." Wearing a blindfold and earplugs, Resanovic could tell where the foot was being touched, or how much the knee was flexed. "I recognize when they touch thumb or heel, or foot anywhere else."
The machine and the nervous system are re-connected
A European consortium led by ETH Zurich and SensArs Neuroprosthetics has developed the neuroprosthesis that gives leg amputees natural sensations of touching the ground with the foot and moving the knee.
A sensorized insole is placed under the prosthetic foot. The signals from the insole and prosthetic knee sensors are translated in impulses of current, the language of the human nervous system, which are delivered to the residual peripheral nerve through tiny electrodes, implanted transversally into the nerve itself. Then, nature does the rest: the signals from the residual nerves are conveyed to the brain of the person, which is able to perceive what happens at the prosthesis and to adjust the walking accordingly. The machine and the body are finally re-connected. Having back the awareness of the prosthesis allows the subjects to feel trampled obstacles and to avoid falls.
"We developed the first leg with feelings for highly disabled, above-knee amputees, which enabled them to surpass unexpected obstacles without falling, or to climb stairs much faster. These two tasks are extremely difficult, if even possible, for amputees wearing commercial prostheses," said Stanisa Raspopovic, professor at ETH Zurich.
Amputees feel the prosthesis as a real limb
Leg amputees, while walking, do not trust the prosthesis and rely too much on the healthy leg, reducing mobility. The prosthesis, not being connected with the brain, doesn't feel as a part of their body.
Brain activity measurements and psychophysical tests revealed that the neuroprosthesis is perceived as an extension of the body, as a real limb. The connection between the machine and nerve is fundamental to achieve this.
"You don't need to concentrate to walk, you can look forward and step, you don't need to look where your leg is to not fall." says Djurica Resanovic, volunteer in the study. "The bionic leg integrated with the residual nerve of amputees, enables the brain to accept it as the continuation of the natural leg, and this is essential for higher confidence of the users, and a future wide-spread of these technology," Raspopovic said.
Translation to all users
"An investigation longer than 3 months, with more subjects, and with in-home assessments, should be executed to provide more robust data to draw clinically significant conclusions about an improvement of the health and quality of life of patients," says Francesco Petrini, who is guiding an effort to place these technologies to the market with the start-up SensArs Neuroprosthetics.
Source and top image: ETH Zurich
Learn more at the next leading event on the topic: Healthcare Sensor Innovations USA 2020