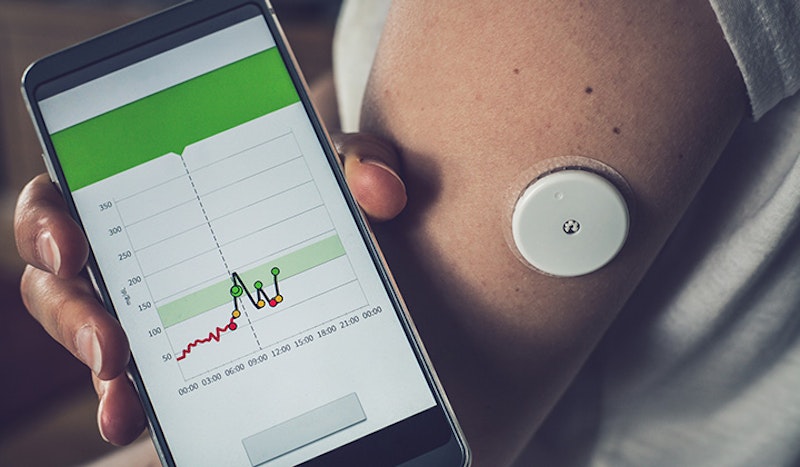 People with diabetes would benefit from using wearable glucose monitors - according to new research from the University of East Anglia. For more information see the IDTechEx report on Technologies for Diabetes Management 2019-2029: Technology, Players and Forecasts.
The devices help people with diabetes manage their condition by reducing the need for finger-prick blood tests. But while they have been approved by the NHS, mainly for younger adults, they are not universally available. A new study, carried out in collaboration with the Norfolk and Norwich University Hospital (NNUH) and published in BMJ Open, shows that the devices would be particularly beneficial to older people with memory problems.
Lead researcher Dr Katharina Mattishent, from UEA's Norwich Medical School, said: "Older people with memory problems can find it more difficult to keep an eye on their blood sugars. Older methods of checking blood sugars rely on people doing finger-prick tests. The newest technology works by allowing a sensor inserted under the skin on the arm to pick up sugar readings all the time for up to two weeks without having to do finger-prick tests. The sensor reads sugar levels and transmits them wirelessly to a display on a portable reader held near the sensor - a bit like swiping a contactless bank card. The device has famously been used by former Prime Minister Theresa May among others. It is estimated that up to 20 percent of older people with dementia also have coexisting diabetes. It's a big problem because they may be more prone to low blood sugars (hypoglycaemia) from their medication, but not recognizing the warning signs - or what to do if it happens. This is the first project to see if new wearable glucose monitoring technology could be useful for older people with diabetes and memory problems."
The research team investigated whether using the Freestyle Libre flash glucose monitoring system could help older people with memory problems manage their diabetes. They trialled the device with 12 participants who were experiencing memory problems, or who had been diagnosed with dementia. The average age of participants was 85. The devices captured data across 14 days and the research team interviewed the participants and carers to see how they got on with using the devices.
Prof Yoon Loke, also from UEA's Norwich Medical School, said: "Our study found that older people and their carers overwhelmingly found the device to be acceptable to use and reassuring to be able to check sugar levels more easily. It didn't interfere with their day-to-day activities and they were not aware of the device while sleeping at night. Carers spoke favourably about the simplicity of the device. And all of the participants were positive about recommending it to others. One of the carers said that it is very stressful to have to regularly stab her husband's fingers to get blood samples. He had dementia and diabetes, and couldn't understand why anyone needed to hurt him with a needle. So you can see how something as simple as using this device could really benefit this vulnerable group and their carers. One problem we found though was that data recorded was not always complete because it relied on participants or their carers 'swiping' three scans a day. Real-time devices that automatically record and send the data through Bluetooth may therefore be even more beneficial for people with memory problems," he added.
Prof Ketan Dhatariya, Consultant in Diabetes and Endocrinology at the Norfolk and Norwich University Hospital (NNUH), said: "The increasing numbers of people living with diabetes as they get older means that the traditional ways that they are being looked after need to be revisited. This work helps in that journey to help older people with cognitive impairment and diabetes live healthier and safer lives. It is timely because of the new documents looking after the care of diabetes in frail older adults published by the Joint British Diabetes Societies for Inpatient care and also a document published by Diabetes UK looking at the management of older adults with type 1 diabetes."
Dr James Pickett, Head of Research at Alzheimer's Society, said: "We're delighted to see our funded research demonstrating possible benefits of wearable technology for some people with diabetes. Many people with dementia have other health conditions, and managing them all together can be challenging. It's exciting to see that technology may be part of the answer. The next step is to test the impact in a larger group of people. Devices which continuously monitor people with dementia could help keep them out of hospital, preventing unnecessary distress, and saving the NHS money. While research for new drugs is vital, studies like this are just as crucial, which is why we are currently funding £15m of care research that could offer more immediate impact of improving health and quality of life."
Source and top image: University of East Anglia