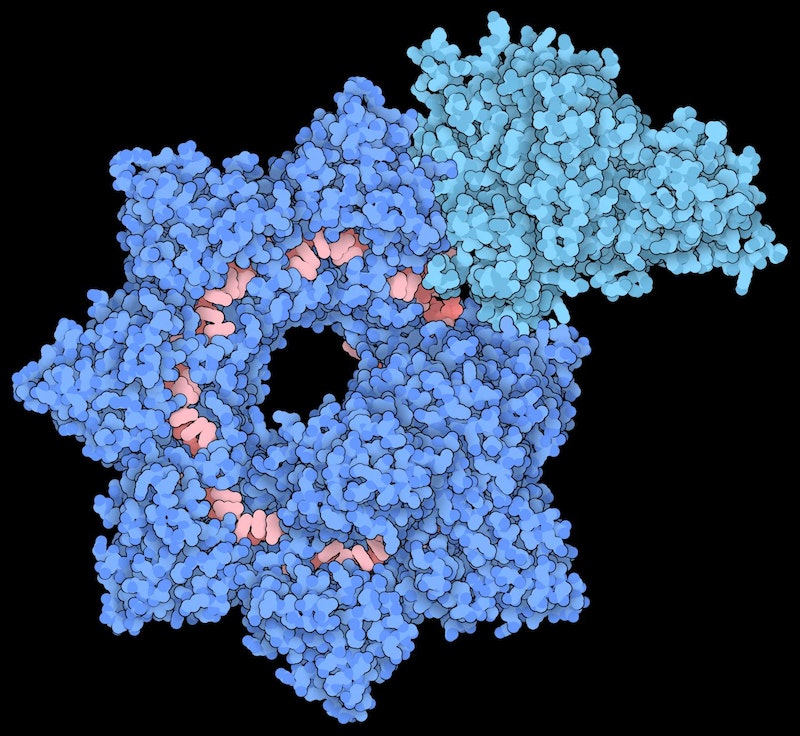 Columbia scientists have captured the first images of a new gene editing tool that could improve upon existing CRISPR-based tools. The team developed the tool, called INTEGRATE, after discovering a unique "jumping gene" in Vibrio cholerae bacteria that could insert large genetic payloads in the genome without introducing DNA breaks. For more information see the IDTechEx report on Synthetic Biology 2018.
In the new study, published in Nature, the researchers harnessed a Nobel Prize-winning technique called cryo-electron microscopy to freeze the gene editing complex in action, revealing high-resolution details about how it works.
"We showed in our first study how to leverage INTEGRATE for targeted DNA insertions in bacterial cells," says Sam Sternberg, PhD, assistant professor of biochemistry & molecular biophysics at Columbia University Vagelos College of Physicians and Surgeons, who led the research with Israel Fernandez, PhD, assistant professor of biochemistry & molecular biophysics at Columbia. "These new images, a wonderful collaboration with Israel Fernández's lab, explain the biology with incredible molecular detail and will help us improve the system by guiding protein engineering efforts."
Starts like CRISPR, but has a different ending
The researchers used a technique called cryo-electron microscopy, which involves flash freezing a sample of the gene editing complex in liquid nitrogen and bombarding it with electrons. They then used the images they captured with the electron microscope to generate atomic resolution models of the INTEGRATE system.
The structural model reveals that the complex is made up of two main sections that are arranged in a helical filament. The larger portion, called Cascade, winds around and carries a guide RNA that it uses to scan the cell for a matching sequence in DNA. Once it locates and binds the target sequence, it threads the DNA strand through the TniQ "transposition" proteins that sit on the end of the complex and recruit other enzymes that help modify the DNA.
The scanning mechanism of INTEGRATE appears to work in a similar way to other well-studied CRISPR systems, some of which also contain a Cascade complex with guide RNA. However, unlike other CRISPR systems that use Cascade to target DNA for cutting, the function of Cascade within INTEGRATE is to target DNA for highly accurate insertion of genetic payloads.
"Visualizing biology on this scale is truly amazing and can easily excite even those unfamiliar with the topic. The quality of this work, and the speed at which it was accomplished, is emblematic of the collaborative environment afforded by great mentors like Sam and Israel," says Tyler Halpin-Healy, a PhD student in the cellular, molecular and biophysical studies graduate program at Columbia University Irving Medical Center and first author of the study.
In their previous study, Sternberg and colleagues used genetics and biochemistry to propose how the CRISPR machinery would functionally link to the transposition machinery--the molecules responsible for gene "jumping"--and the study proved their hypotheses were correct.
Why it matters
Many researchers around the world now use CRISPR-Cas9 to quickly and cheaply make precise modifications to the genome of a cell. However, most uses of CRISPR involve cutting both strands of the target DNA, and the DNA break must then be repaired by the host cell's own machinery. Controlling this repair process is still a major challenge in the field, and undesired gene edits are often introduced inadvertently in the genome. Additionally, existing tools often perform poorly at inserting large genetic payloads in a precise fashion. Improving the accuracy of gene editing is a priority for researchers and is critical for ensuring the safety of therapies developed with this technique.
The new INTEGRATE system developed by the Sternberg lab can accurately insert large DNA sequences without relying on the cell's machinery to repair the strands. As a result, INTEGRATE could prove to be a more accurate and efficient way of making certain gene modifications than the original CRISPR-Cas system that is widely in use. The new tool could also help scientists perform gene editing in cell types with limited DNA repair activity such as neurons, where attempts to use CRISPR have been comparatively less successful.
What's next
In addition to informing future engineering efforts, the structures highlight a possible proofreading checkpoint. Existing CRISPR technologies often suffer from so-called "off-target effects," in which unintended sequences are promiscuously modified. The new structures reveal how Cascade and TniQ work together to ensure that only the correct "on-target" sequences are marked for DNA insertion. The researchers plan to further explore this checkpoint while developing the tool for new therapeutic approaches to disease.
Source and top image: Columbia University Irving Medical Centre
Learn more at the next leading event on the topic: Healthcare Sensor Innovations Europe 2020

Energy Harvesting for Electronic Devices: Latest Situation
AI: State-Of-The-Art and Commercialisation Status in Diagnostics
Could Vertical Farming be the Solution to Supermarket Supply Problems
Wearable For Patients With Type 2 Diabetes