The Worldwide Test for Covid-19 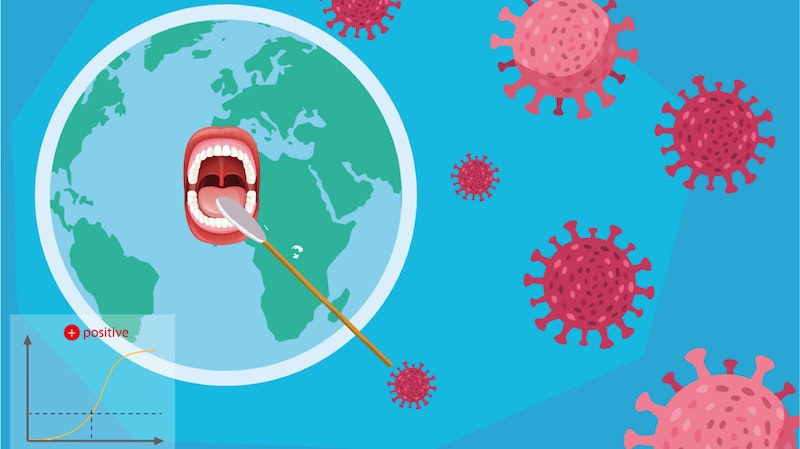 The outbreak of COVID-19 has put around a billion people in quarantine and brought the economies of many countries to a halt. However, the real impact on society is yet to come. While some criticize severe lockdowns as alarmist, others are calling for even stricter measures. Panic spreads quicker than the virus and is fueled by lack of information such as the real number of infected cases and the actual case fatality ratio (CFR). This leads to large uncertainties in quantifying and predicting the extent of this pandemic.
To obtain this key information, reliable diagnostics of COVID-19 for tracking and surveillance of new infections and recoveries becomes essential. For SARS, the development of tests took about five months. With COVID-19, it has been remarkable the short time it took from the detection of the first case (Nov. 2019) [1] to the sequencing of the viral genome by Chinese scientists (11 Jan 2020) [2], to the development of the first molecular assay (13 Jan 2020) protocol-v2-1.pdf?sfvrsn=a9ef618c_2" target="_blank">[3]. Nevertheless, in many countries, testing is still minimal or rationed, as the testing capacity is overwhelmed by the extent of the outbreak. This has led to significant variations in testing numbers per population across countries [4]. Not enough statistically well-designed testing prevents us from knowing the real number of infected cases and leads to a more than likely overestimate of the CFR [5], once adjusted for delays in reporting finalised cases [6]. Unreported infections (either asymptomatic or mild cases) may have contributed to the surge in cases around the world. Countries with widespread mass testing and surveillance strategies like South Korea, have been able to contain the spread successfully [7].
So what are the molecular diagnostic methods for COVID-19 that are currently available? How do they work? What are the limitations? What new technologies are we expecting in this direction? This article aims to answer these questions and explores how we can accelerate sensitive and accurate mass testing.

Molecular diagnostic assays aim at detecting the presence of viral RNA specific to SARS-COV-2 (the virus responsible for COVID-19), such as those from regions of the virus nucleocapsid gene. The gold standard test involves the amplification of the viral RNA by a process called Reverse Transcription Polymerase Chain Reaction (RT-PCR).
How the RT-PCR test works
A swab taken from the nose or throat of the suspected individual is taken, and the sample is then processed for nucleic acid extraction and amplification. We can divide this process into three steps: RNA extraction, transcription of RNA into complementary DNA (cDNA) and PCR amplification of DNA. 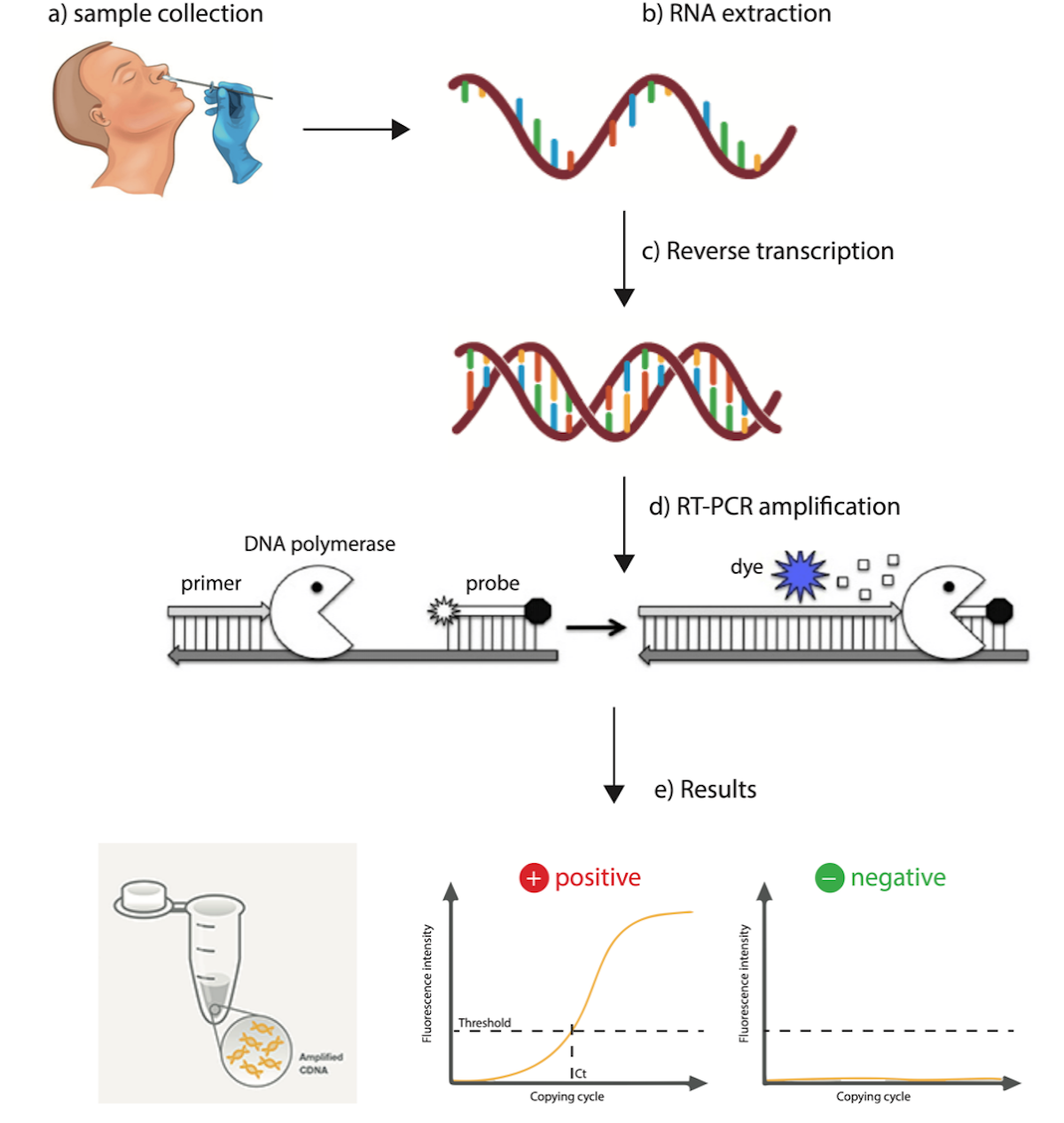 Figure 1 Steps in the RT-PCR test: a) Specimen is taken from the nose or throat of individual b) RNA is extracted and c) is transcribed into complementary DNA (cDNA) , d) Once the primers have bound to the DNA, they provide a starting point for the DNA polymerase to help copy it. DNA polymerase then degrades the bound probe which results in an increased fluorescence signal e) The fluorescence increases as copies of the virus DNA are made. If the fluorescence level crosses certain threshold, the test is positive.
RNA extraction: RNA is isolated and purified using fast spin-columns (e.g. QIAamp Viral RNA Mini Kit by QIAGEN).
Master mixture preparation for RT-PCR: A mixture is prepared containing a forward primer (short oligonucleotides needed to start DNA synthesis), backward primer and a fluorescent probe, together with the enzymes Reverse Transcriptase (responsible for converting RNA into cDNA) and DNA polymerase (responsible for DNA replication). National laboratories and companies around the world have developed different primers/probes addressing different regions of the viral genome. Some companies provide these mixtures in lyophilised form for direct use.
Reagent mixing and Real-Time PCR Amplification: In a single or two-step RT-PCR, first RNA is converted into complementary DNA and then the DNA signal is amplified by real time polymerase chain reaction (a.k.a quantitative PCR). In Real Time-PCR the probe strand (containing two dyes: a reporter and a quencher) binds to a specific target sequence to SARS-COVID-19 located between the forward and reverse primers. During the extension phase of the PCR cycle, the polymerase is able to degrade the bound probe, causing a reporter dye to separate from a quencher dye, resulting in an increased fluorescent signal. The fluorescence intensity is monitored at each amplification cycle.
The fluorescence signal increases as more copies of DNA are produced. If the fluorescence crosses a certain threshold, set above expected background levels, the test is positive. If the virus was not present in the sample, the PCR test would not have made copies, so the fluorescence threshold is not reached — the test is then negative (Figure 2b). Ct (cycle threshold) is the amount of PCR cycles required to achieve such a threshold (i.e. exceed the background level). Internal positive (samples known to contain SARS-COV-2 RNA) and negative controls are run in parallel to confirm the validity of the test.
What can go wrong?
An important question arises regarding the sensitivity of these tests. The limit of detection (LoD) sets the lowest concentration of SARS-COV-2 that can be detected by the PCR test. The LoD is determined by detecting the presence of the viral RNA at least 95% of the cases. For COVID-19 assays, the LoD can reach levels lower than 10 genome copies per reaction (0.5 cp/ul) [8]. However, the sensitivity varies depending on the chosen kits and PCR instrument. Failure to detect the virus in infected patients (false negatives) can be due to low sensitivity or other issues, such as laboratories working under pressure, sample collection and preparation. It is yet unknown which types of specimens are optimal for detection with RT-PCR. A recent study from Wuhan suggests that nasopharyngeal swabs offer greater consistency than other types of samples [9].These tests could also lead to false positives, if for example, specimens are contaminated or the protocol is not followed appropriately.
Whether positive or negative, the PCR test is only indicative of whether the virus is present at the time the test is taken. It neither rules out whether the patient was infected in the past and therefore has developed immunity, nor that the patient is at an early stage and will show symptoms in the future.
The long processing time and high demand of testing kits and ancillary ingredients needed for sample preparation and the test represent a serious bottleneck. The whole process from sample can provide results in 4 to 6 hours, although some centralised labs might require up to 48 hours from sample to answer. While large providers such as Roche Diagnostics, Qiagen, Thermo Fisher Scientific, etc. have ramped up the capacity to provide kits and reagents, it is questionable whether they can meet the needs of many countries at the moment. Some companies are providing their own kits and proprietary rapid point-of-care molecular diagnostic systems, mostly based on RT-PCR, which include robotic automation and microfluidic handling of samples (an extensive list can be found in [10]) .

Facing reagent shortages, many countries like Spain and the UK are raising an urgent call out to the life sciences sector to help increase the development and supply of antigen testing kits for COVID-19, so called "rapid tests".
These tests are less reliable than RT-PCR tests but can be performed at the point-of-care, or in community settings without the need of expensive equipment. The concept of the test is a bit similar to how pregnancy tests work. Normally they rely on lateral flow assays, simple cellulose-based devices intended to detect the presence of a target analyte in a liquid sample. They make use of antibody-antigen recognition, using monoclonal antibodies to detect viral antigens. Test strips are coated with antibodies that bind to a viral protein (there are prototypes that use aptamers instead). If the patient's sample contains such proteins, they will bind to the antibodies, forming a coloured indicator on the strip. Colloidal gold nanoparticles are the most commonly used material to induce a change in colour in the presence of the analyte. This represents one of the wonderful uses of nanoplasmonics.
These tests can be done in 10-30 min and far away from big laboratories, but in order for them to give reliable measurements, the concentration of the analyte needs to be higher than 10 copies/ul. This means that most of these tests may only work in symptomatic individuals. Spain has announced the purchase of 640000 antigenic rapid tests. 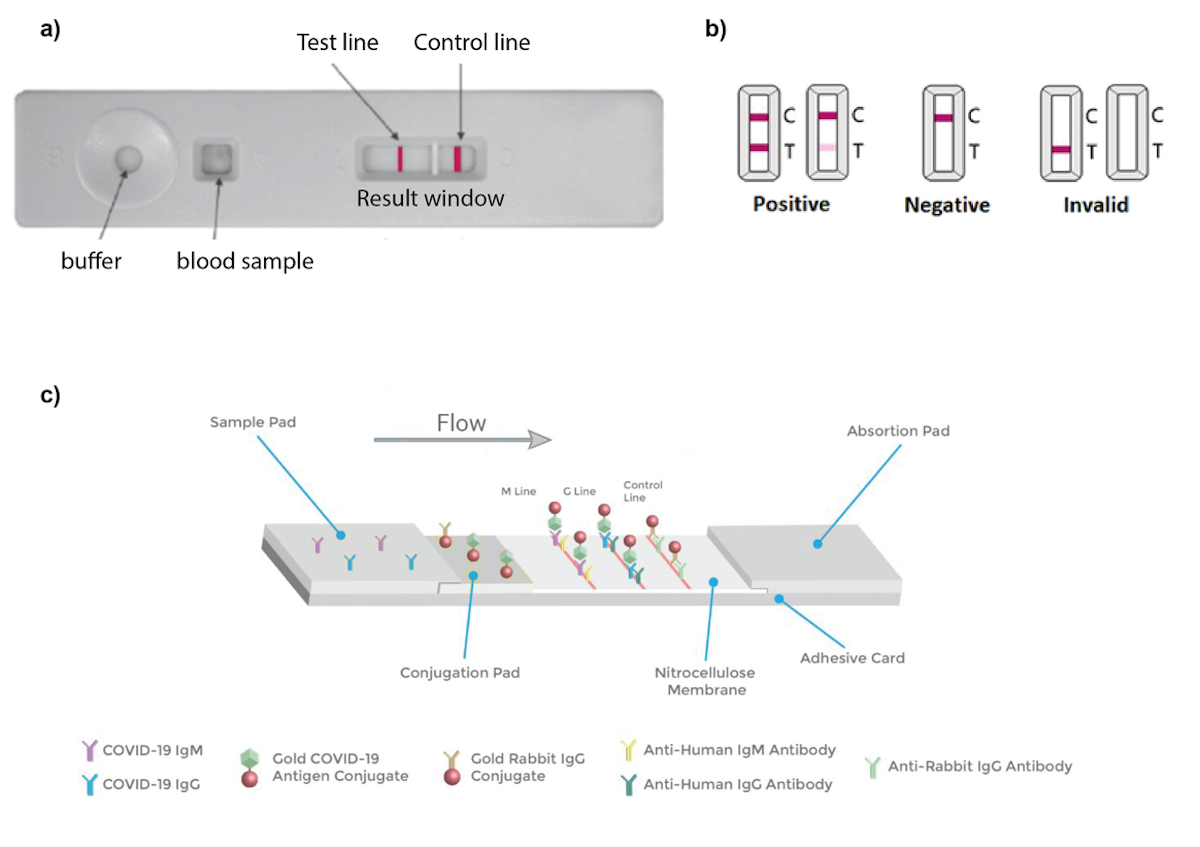 Figure 2 Typical lateral flow assay for a serological test a) Inside the cassette is a strip made of filter paper and nitrocellulose. Typically, a drop of blood is added to the cassette through one hole (sample well), and then a number of drops of buffer usually through another hole (buffer well). Buffer carries the sample along the length of the cassette to the results window. b Interpretation of results. c A schematic of the COVID-19 lateral flow test from 11. The antibody first binds to an antigen conjugated to colloidal gold in the conjugation pad, and the resultant complex is captured on the strip by a band of bound antibody, forming a visible line (T - test line) in the results window. A control line (C- control line) gives information on the integrity of the antibody-gold conjugate.
Serological tests make use of the same principle as other immunoassays, but instead of detecting viral antigens, the assay detects the presence of antibodies against the virus in the patient sample. These tests can be used to detect current and past exposure to SARS-COV-2 and can be done in batches in a laboratory or individually at point-of-care settings. Quantifying the number of immune populations will help assess the true extent of an outbreak, and inform prevention and control strategies.
A problem with both antigen and serological immunoassays is that antibodies may cross-react and a SARS-COV-2 could also give a positive result with other types of coronavirus. As many companies around the world race to produce rapid tests, probing the accuracy of such tests will require trials with hundreds of known SARS-COV-2 infected cases.

3. Towards mass testing and technology innovations

Researchers at the Technion have accelerated the RT-PCR testing rate by taking a pooling approach, enabling the simultaneous testing of dozens of samples. This group testing method is able to identify a positive sample among 64 different samples [11]. No new technology is needed, but the necessary logistics to implement the pooling strategy, substituting the current individual testing. Such a pooling method, if scaled up appropriately could lead to massive testing, making better use of current resources and quickly rejecting negative cases.
Another ground-breaking approach is a CRISPR-based lateral flow assay. CRISPR is a powerful gene-editing tool that has already led to ground-breaking outcomes in clinical trials in the past years. Going beyond Cas9 and its capacity to act as "molecular scissors", CRISPR and its associated proteins can offer more than that.
Mammoth Bioscience and the Broad-Institute in a race for CRISPR-based diagnostics, are using CRISPR as a molecular diagnostic tool, rather than as an editing tool, to create fast, cheap and more accurate tests to detect illnesses. CRISPR based tests offer the possibility of diagnosing infections as accurately as conventional methods, and almost as simply as pregnancy test strips. They have recently secured $45 Million For Crispr-based Diagnostics and have partnered at UC San Francisco to use their test against coronavirus. Their published results on SARS-COV-2 promise a 30 min low-cost CRISPR-based lateral flow assay [12]. The Broad-Institute at MIT has developed an analogous technique called SHERLOCK [13], with a COVID-19 specific protocol [14].
Uncertainties in modelling the extent of this pandemic, has given rise to discrepancies in scientific advice provided to governments. Some researchers even suggest, without any serological evidence available yet, that a large fraction of the population has already developed immunity to COVID-19 [15].
While we wait for a vaccine, let us hope we can all connect to the World Wide Test!
For more information on medical technology innovations please see the IDTechEx reports on "Molecular Diagnostics 2020-2030" and "Biomedical Diagnostics at Point-of-Care 2019-2029".
Source: Ibon Santiago - Physics Department, Technical University of Munich, Am Coulombwall 4a, 85748 Garching b. München, Germany.