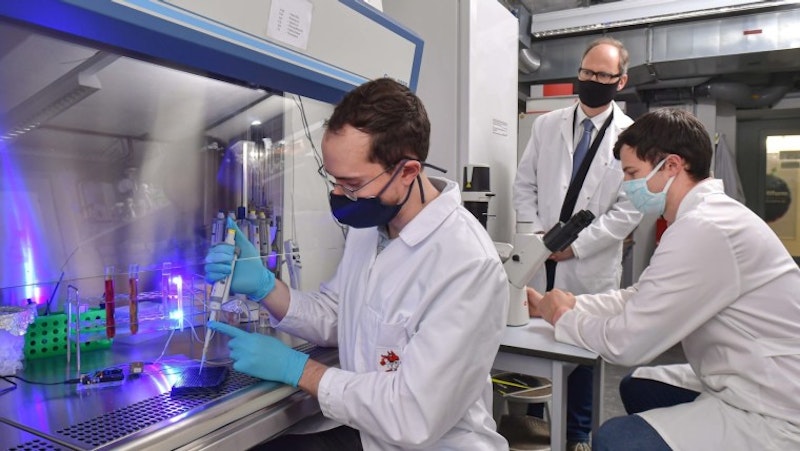 Photopharmacology investigates the use of light to switch the effect of drugs on and off. Now, for the first time, scientific teams from Jena, Munich, and New York have succeeded in using this method to control a component of cells that was previously considered inaccessible.
"Up to now, there are no drugs available that target actin, because the protein is found everywhere in the body, for example in large quantities in the muscles," explains Prof. Hans-Dieter Arndt of Friedrich Schiller University Jena. "Such a substance would therefore have little to no targeted effect. However, our new compounds only exert activity on actin in areas where cells are exposed to the appropriate light," said Arndt, a researcher in organic chemistry. Because actin is an essential component of the cell structure - more precisely of the cytoskeleton - individual cells can be selectively manipulated to an accuracy of as little as 10 micrometres. This technique can also be used to control the movement of selected cells. Arndt's international research team has reported on this in the renowned "Journal of the American Chemical Society". For further information see the IDTechEx report on Bioelectronic Medicine 2019-2029.
Violet light switches on, green light switches off
In its research, the group synthesized a variant of a natural substance that in its natural form stiffens the very dynamic actin cytoskeleton in the organism. In the laboratory variant, the molecule was developed further, so that its structure changes when violet light falls on it. This increases the stabilising effect of this molecule. After a certain period of time, or when a green light is turned on, the structure reverts to its inactive basic form and the natural dynamics is restored. After this substance, called Optojasp, is absorbed by cells in lab experiments, light can be used to control specifically the viability and mobility of individual cells - and also the communication of the cytoskeleton.
Looking ahead to potential future applications, Arndt says: "It is possible that this method could be used in the future to treat diseases of the eye or on the skin, i.e. of organs that can easily be exposed to light. This technique could also be of interest in the field of neuroregeneration. The aim here is often to encourage certain nerve cells to grow in preference to others." Arndt also sees potential to apply his method in immune cells that are highly mobile.
"Above all, I consider this to be a new and exciting tool for biology," says the Jena researcher. "These molecules should make it easier to study biological systems than with the help of light-sensitive proteins, which might be introduced by genetic engineering. With the Optojasps, the influence of actin dynamics can be studied directly - all you need to do is to add the compound, and irradiate!"
Now that the method has been shown to work, Arndt and his partners are working to optimise these molecules further and study them in greater detail.
Source and top image: Friedrich Schiller University Jena
Learn more at the next leading event on the topic: Healthcare Sensor Innovations USA 2020