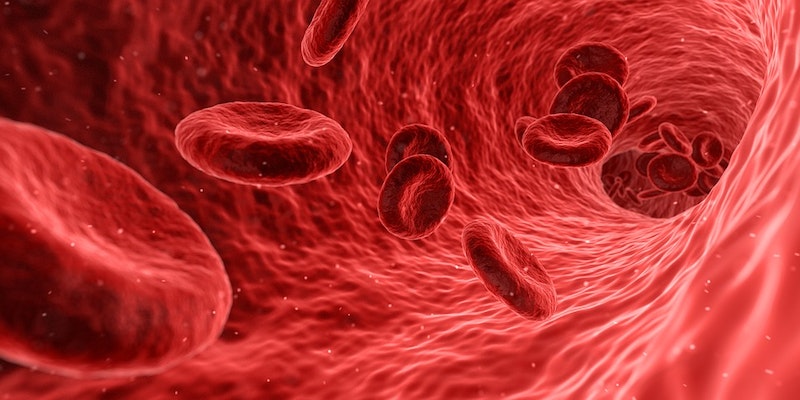 Scientists have tried to develop synthetic red blood cells that mimic the favorable properties of natural ones, such as flexibility, oxygen transport and long circulation times. But so far, most artificial red blood cells have had one or a few, but not all, key features of the natural versions. Now, researchers reporting in ACS Nano have made synthetic red blood cells that have all of the cells' natural abilities, plus a few new ones.
Red blood cells (RBCs) take up oxygen from the lungs and deliver it to the body's tissues. These disk-shaped cells contain millions of molecules of hemoglobin -- an iron-containing protein that binds oxygen. RBCs are highly flexible, which allows them to squeeze through tiny capillaries and then bounce back to their former shape. The cells also contain proteins on their surface that allow them to circulate through blood vessels for a long time without being gobbled up by immune cells. Wei Zhu, C. Jeffrey Brinker and colleagues wanted to make artificial RBCs that had similar properties to natural ones, but that could also perform new jobs such as therapeutic drug delivery, magnetic targeting and toxin detection. For further information see the IDTechEx report on Synthetic Biology 2018.
The researchers made the synthetic cells by first coating donated human RBCs with a thin layer of silica. They layered positively and negatively charged polymers over the silica-RBCs, and then etched away the silica, producing flexible replicas. Finally, the team coated the surface of the replicas with natural RBC membranes. The artificial cells were similar in size, shape, charge and surface proteins to natural cells, and they could squeeze through model capillaries without losing their shape. In mice, the synthetic RBCs lasted for more than 48 hours, with no observable toxicity. The researchers loaded the artificial cells with either hemoglobin, an anticancer drug, a toxin sensor or magnetic nanoparticles to demonstrate that they could carry cargoes. The team also showed that the new RBCs could act as decoys for a bacterial toxin. Future studies will explore the potential of the artificial cells in medical applications, such as cancer therapy and toxin biosensing, the researchers say.
Source: American Chemical Society
Top image: Pixabay
Learn more at the next leading event on the topic: Healthcare Sensor Innovations USA 2020