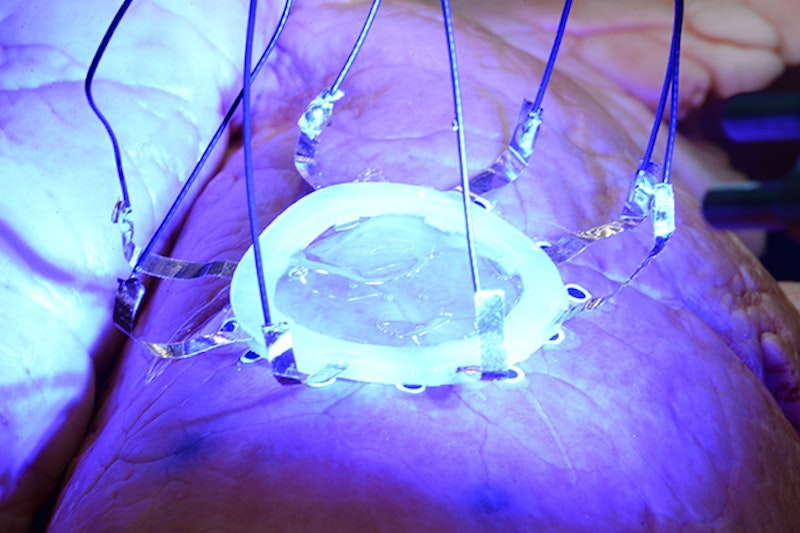 In groundbreaking new research, mechanical engineers and computer scientists at the University of Minnesota have developed a 3D printing technique that uses motion capture technology, similar to that used in Hollywood movies, to print electronic sensors directly on organs that are expanding and contracting. The new 3D printing technique could have future applications in diagnosing and monitoring the lungs of patients with COVID-19. For more information see the IDTechEx report on 3D Printing in the Medical and Dental Industry 2019 - 2029.
The research is published in Science Advances, a peer-reviewed scientific journal published by the American Association for the Advancement of Science (AAAS).
The new research is the next generation of a 3D printing technique discovered two years ago by members of the team that allowed for printing of electronics directly on the skin of a hand that moved left to right or rotated. The new technique allows for even more sophisticated tracking to 3D print sensors on organs like the lungs or heart that change shape or distort due to expanding and contracting.
"We are pushing the boundaries of 3D printing in new ways we never even imagined years ago," said Michael McAlpine, a University of Minnesota mechanical engineering professor and senior researcher on the study. "3D printing on a moving object is difficult enough, but it was quite a challenge to find a way to print on a surface that was deforming as it expanded and contracted."
The researchers started in the lab with a balloon-like surface and a specialized 3D printer. They used motion capture tracking markers, much like those used in movies to create special effects, to help the 3D printer adapt its printing path to the expansion and contraction movements on the surface. The researchers then moved on to an animal lung in the lab that was artificially inflated. They were able to successfully print a soft hydrogel-based sensor directly on the surface. McAlpine said the technique could also possibly be used in the future to 3D print sensors on a pumping heart.
"The broader idea behind this research, is that this is a big step forward to the goal of combining 3D printing technology with surgical robots," said McAlpine, who holds the Kuhrmeyer Family Chair Professorship in the University of Minnesota Department of Mechanical Engineering. "In the future, 3D printing will not be just about printing but instead be part of a larger autonomous robotic system. This could be important for diseases like COVID-19 where health care providers are at risk when treating patients."
Source and top image: University of Minnesota