What the Oil Price Crash Means for Bioplastics

Bioplastics, plastics made from a biological feedstock, could be a renewable and more sustainable alternative to fossil-based plastics. Unlike the vast majority of fossil-based plastics, many bioplastics are biodegradable, which could help provide a solution to the dizzying escalation in plastic waste seen across much of the world. And although bioplastics have historically struggled to deliver the same performance as fossil-based plastics, technology is increasingly closing the gap, creating highly functional plastics that do not cost the Earth. "Bioplastics 2020-2025", the recent report by IDTechEx, explores the emerging technologies around bioplastics and forecasts the future of the industry over the next five years.
Despite the clear environmental advantages, bioplastics still only have about a 0.5% market share of the global plastics industry. Even more worryingly for the bioplastics industry, this tiny market share has been fairly consistent for the last few years, meaning that bioplastics are not gaining ground on fossil-based plastics. This raises the question - why aren't bioplastics growing faster?
The short answer is price. In general, consumers are willing to pay a bit extra for a green product, but only up to a point - the majority are happy to pay 5% extra for a green product, but this drops rapidly if the price difference grows any further. Unfortunately, bioplastics can be costly to produce and can only compete on price with fossil-based plastics if oil prices are high. Around seven years ago, oil prices were steadily growing, and the future looked bright for the bioplastics industry.
Then, in 2014, oil prices crashed, throwing the bioplastics industry into turmoil. In the following years, many major bioplastics companies went out of business or rebranded. After spending over $300 million on a bioplastics production plant, Metabolix abandoned the project, changing its name to Yield10 Bioscience and changing its focus to agritech. In January 2020, Italian PHA producer Bio-On was declared bankrupt, less than a year after having been valued at over $1 billion. CEO Marco Astorri was arrested in October 2019, following accusations of false accounting and market manipulation.

The prices of fossil-based plastics are closely tied to oil prices. Falling oil prices have had a major impact on the bioplastics industry. Source: IDTechEx Research - "Bioplastics 2020-2025"
Since 2014-2015, the bioplastics industry has struggled to get back on its feet. However, production has been steadily growing, as improvements in technology allow for cheaper production and an increasing global focus on sustainability makes bioplastics an increasingly attractive option for many governments. Companies, such as Corbion and Avantium, have been successfully developing partnerships with major food and beverage companies, with Avantium recently winning the support of Carlsberg and Coca-Cola for its plant-based bottle that the company claims can biodegrade in a year. Sustainable tech company Anellotech recently announced construction of a plant capable of producing 40,000 tonnes per year of biologically derived aromatic compounds, valuable starting materials for bioplastic production. In 2016, Metabolic Explorer announced the construction of a plant able to produce 50,000 tonnes per year of biobased 1,3-propanediol, another important starting material in bioplastic production. 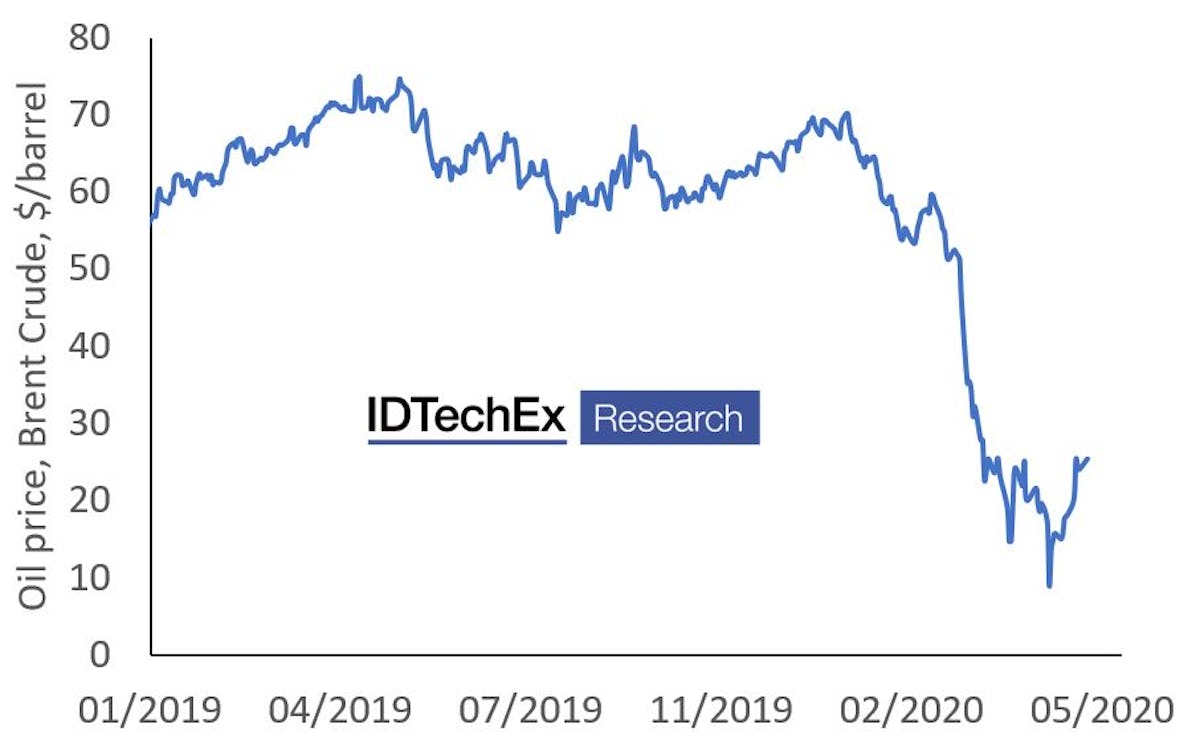 Oil prices fell sharply in spring 2020, following the COVID-19 outbreak and a price war between Russia and Saudi Arabia. Source: IDTechEx Research - "Bioplastics 2020-2025"
However, this gradual recovery of the bioplastics industry hit a major roadblock in spring 2020. The COVID-19 outbreak led to largescale reduction in demand for oil as the global industry was forced to slow down. This, alongside an escalating price war between major oil producers Russia and Saudi Arabia, led to a huge crash in global oil prices, with oil prices even briefly turning negative in certain US oil markets.
The crash in global oil prices threatens to suck the life out of the resurging bioplastics industry, creating a huge gulf in prices between bioplastics and fossil-based plastics. There is one bright side to the COVID-19 outbreak, however, demand for single-use packaging is increasing thanks to an increase in demand for food delivery packaging and retailers banning bring-you-own-container schemes to reduce the risk of the virus spreading. Whilst this growth in demand for plastics will be some comfort to the bioplastics industry (although probably not for the world's oceans), the climate is still extremely worrying for the industry.
Major corporations such as Unilever and Coca-Cola appear to still be committing to the sustainable plastics pledges made over the last few years that have helped the bioplastics industry to survive since 2014-2015, and there are hopes that the industry can weather the storm until normality returns. Nevertheless, the next few months could be pivotal for the bioplastics industry, with many executives praying for a swift recovery from the COVID-19 outbreak and a resolution to the ongoing trade wars.
"Bioplastics 2020-2025" is a recent report written by IDTechEx. It provides an overview of the emerging technologies involved in the industry, as well as an overview of the market factors that could be key to the success of the industry. For a wider discussion around green technology and end-of-life options for polymers, see "Polymer Recycling Technologies 2020-2030".
For more information on this report, please visit www.IDTechEx.com/Bioplastics or for the full portfolio of research available from IDTechEx please visit www.IDTechEx.com/Research.