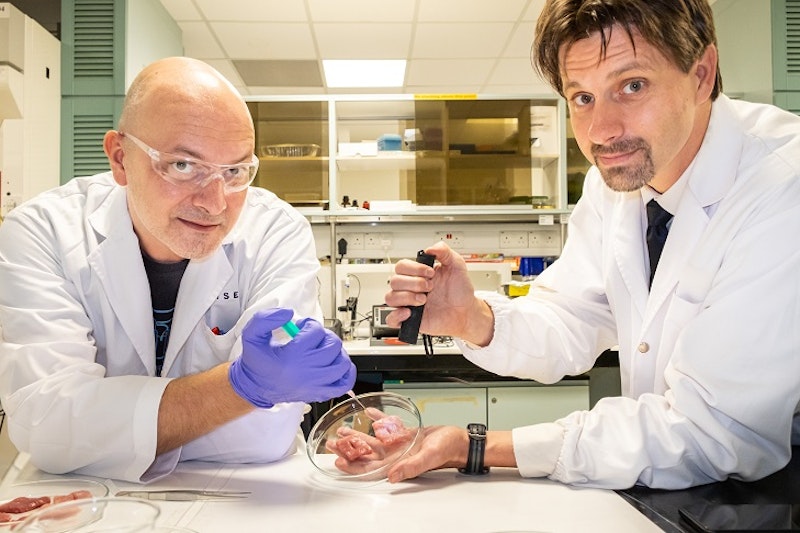 Materials scientists from Nanyang Technological University, Singapore (NTU Singapore) have invented a new type of surgical glue that can help join blood vessels and close wounds faster and may also serve as a platform to deliver pain relief drugs. In a paper published in Elsevier's Biomaterials in July jointly with clinicians from Singapore General Hospital (SGH), the NTU researchers showed that their glue is able to bond soft tissues including muscle and blood vessels, even when their surfaces are wet.
Named CaproGlu, it is activated by a low dose of ultraviolet (UV) light that cures it in seconds, turning it from a liquid glue into a solid but flexible biorubber - a biocompatible material that can be resorbed by the tissue after a few weeks. The team showed in animal experiments that blood vessels can be rejoined with just four stitches and a mesh wrapper dipped in CaproGlu, compared to the usual eight stitches that are required for a reliable and unobstructed join. The authors estimate that this will reduce surgery time by 25 per cent, as surgeons spend less time and effort stitching up blood vessels and tissues. As demonstrated in animal experiments, CaproGlu can also be used to deliver local anaesthetics or pain relief medication to tissues in the body, which may be useful both during and after an operation and would reduce the need for pain relief medication to be administered afterwards. For further information see the IDTechEx report on Advanced Wound Care Technologies 2020-2030.
Unlike current bio-adhesives - which need two chemicals to be mixed prior to use - the CaproGlu is a one-pot liquid gel solution that comes ready-to-use.
Lead authors of the paper, Associate Professor Terry W.J Steele and Senior Research Fellow Dr Ivan Djordjevic, emphasised that most surgical adhesives available on the market do not work in water or wet environments as found in the human body. "To make our light-activated glue work on wet tissues, we engineered our glue to first remove water from the surface and thus allow adhesion to the dehydrated surfaces," said Associate Prof Steele. "This unique advantage of being able to bond with high strength in a wet environment, as well as being biocompatible, is what makes CaproGlu so suitable to be used in surgery and medical applications."
The adhesion strength of CaproGlu was compared to other commercial bioadhesives on the market and was found to be three to seven times stronger, and is on a par with the shear strength of collagen and muscle tissue found in the human body.
Benefits of CaproGlu
Invented by Associate Prof Steele and Dr Djordjevic from the NTU School of Materials Science and Engineering, CaproGlu combines two ingredients into a single-component formulation that does not require additives. The first is polycaprolactone - a biodegradable polymer which has been approved by the United States Food and Drug Administration for specific applications used in the human body - and the second: diazirine, a light-sensitive molecule that can form strong bonds when activated.
In their research paper which was published in the scientific journal Biomaterials, the scientists demonstrated how CaproGlu could be used as part of a new surgical method, where sutures are used in combination with a glue. Instead of the conventional eight stitches needed to join the two ends of a blood vessel in a rabbit, they used four stitches and wrapped the vessel ends with a biodegradable mesh dipped in CaproGlu and cured with a small dose of UV light which crosslinked the amino acids on the tissue's surface
As a result, the bleeding from the artery immediately after the procedure was comparable to what is observed from conventional stitches. When harvested seven days later, the artery was shown to have completely healed. In a separate experiment, the surgeons inserted CaproGlu loaded with anaesthetics within rats' calves and cured them with UV light before the wound was closed with conventional stitches.
The scientists compared the activity of these rats with two other controls: rats who had received anaesthetics alone and rats who had received CaproGlu without anaesthetics. They found no discernible impediment of movement for the rats which had anaesthetics and CaproGlu loaded with anaesthetics, suggesting that CaproGlu is successful in delivering local anaesthetics over time and could be a useful way to extend local anaesthesia beyond its current limits and also to act as a drug delivery platform for medication such as anticoagulants to prevent excessive blood clotting.
The team also observed that there were no discernible side effects to the animals which had CaproGlu implanted in their skin, which suggested that it is safe and biocompatible as expected. Since the bioadhesive dissolves and resorbs within weeks, no follow up clinical visits would be required for its removal.
Stable shelf life after sterilisation
A big challenge for bioadhesives on the market today is to cope with the standard method by which surgical grade equipment and disposables are sterilised using gamma irradiation. The gamma sterilisation process destroys proteins and activates bonding in both acrylate and epoxy adhesives. Unlike other surgical adhesives available on the market, CaproGlu's protein-free formulation exploits new crosslinking chemistry unaffected by gamma sterilisation.
The light-activated bonding mechanism forms chain links to amino acids at the nanoscale level, even after several months of storage and gamma sterilisation, thus making CaproGlu's production and commercialisation potentially less costly than those based on proteins and acrylates. Their biorubber glue innovation took the research team five years to develop and is the subject of a provisional patent filed through NTUitive, the university's innovation and enterprise company.
Moving forward, the joint team will be looking to conduct further animal experiments and to assess the performance of CaproGlu in other applications, such as on bone and other organic surfaces.
Source and top image: Nanyang Technological University