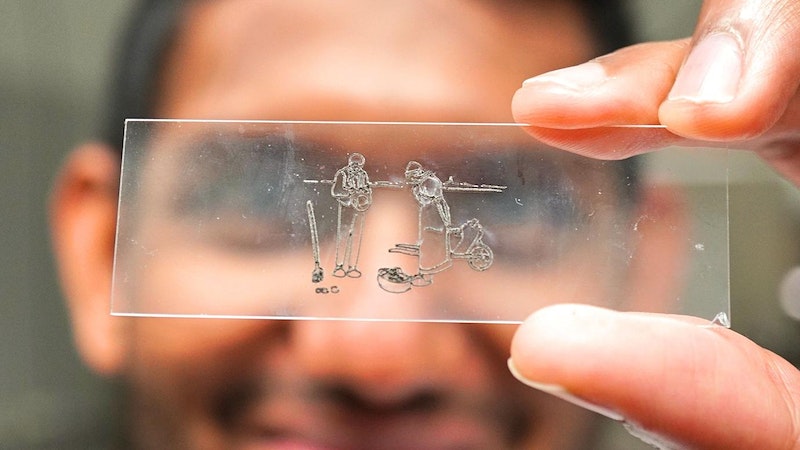 On a simple coffee table sits an inexpensive commercial laser cutter, usually meant for modifying wood or plastic. However, in the lab of University of Chicago scientists Vishnu Nair and Bozhi Tian, what comes out is not engraved wood but a small bioelectronic device that could save lives.
It all starts with a compound called polydimethylsiloxane, or PDMS, which is a type of elastomer—a very elastic, stretchable material. However, a laser can transform the PDMS into a dense silicon carbide layer that is useful for electronics. This property can be used to sculpt bioelectronics in a way that is cheaper and easier than traditional fabrication, while being easy to scale up to make in large quantities—a must for any product to be manufactured for common use. For further information see the IDTechEx report on Bioelectronic Medicine 2019-2029.
"It's a new paradigm in bioelectronics," said Nair, a UChicago graduate student and lead author of a new paper published August 21 in the journal Science Advances. "This technology could potentially be scaled up to create high-quality human pacemakers or other medical applications."
The combination of a soft PDMS, that can wrap around organic tissues, and a hard silicon carbide that can support electronics, is key, the researchers said. The soft component is especially important in order to attach to soft and deformable cells; a mechanical mismatch between a bioelectronic device and the cell can mean loss of functionality. Meanwhile, silicon carbide is particularly good for this application because it does not degrade in the conditions inside a body.
In the past, these soft and hard components had to be synthesized separately, then later molded together. However, in this method, sections of the soft PDMS are turned directly into silicon carbide through precise laser engraving to create a seamless integration.
"This is a first of its kind in the bioelectronics community," said Tian, an associate professor in the Department of Chemistry and an expert in the interfaces of biological and semiconductor systems. "We explored new chemistry using methods that are cost-effective with materials that are commercially available."
To test the new material, the composite was placed on a rat heart and electrical signals were applied. The heart rate immediately synchronized to that of the device.
Other uses include scientific measurements or even stimulating arterial smooth muscle cells. Through the light triggered creation of chemicals such as hydrogen peroxide, a bioelectronic device could signal to nearby cells - creating a targeted response. This means potential control over the contraction and relaxation cycles of muscle cells. These devices have potential use in "remote-controlling" arteries during surgeries and treating the muscles of patients with spinal cord injuries. Furthermore, this paper opens the door for other researchers to find new applications using this method to build both 2D and 3D electronic devices.
"This method is fast, inexpensive, and produces a high-quality product," said Nair. "Through this method, an inexpensive laser cutter could be adapted to create the next wave of affordable and potentially life-saving biomedical devices."
Source and top image: University of Chicago