Opening Eyes to a Frontier in Vision Restoration 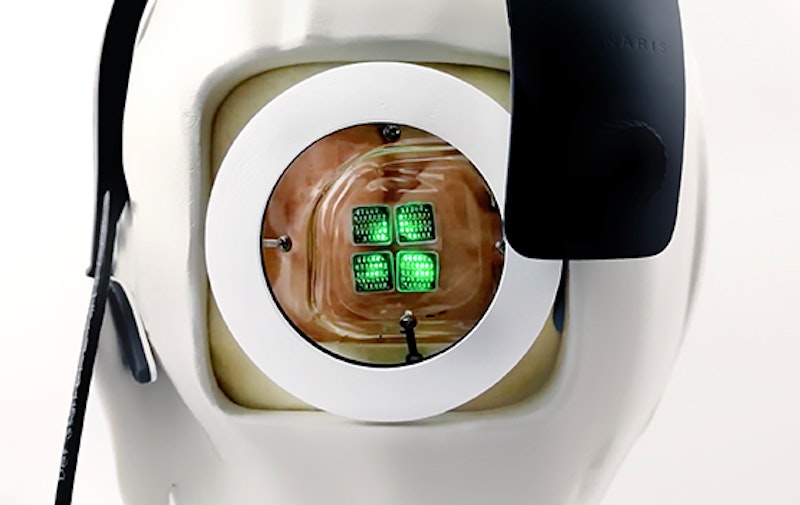 A revolutionary cortical vision device, developed by Monash University researchers that could one day help restore vision to the blind, is being prepared for world-first human clinical trials in Melbourne. Through Monash University's Cortical Frontiers project, researchers have developed miniaturised, wireless electronic implants that sit on the surface of the brain and have the capacity to restore vision.
Further investigations have shown promise for this technology to deliver improved health outcomes to patients with otherwise untreatable neurological conditions, such as limb paralysis. For more information see the IDTechEx report on Neuroprosthetics 2018-2028: Technologies, Forecasts, Players.
Many people who are clinically blind have damaged optic nerves. These prevent signals being transmitted from the retina to the 'vision centre' of the brain. The Gennaris bionic vision system can bypass this damage, making it possible to treat many conditions that currently have treatment limitations. Gennaris is the brainchild of the Monash Vision Group (MVG).
The system comprises custom-designed headgear with a camera and wireless transmitter, a vision processor unit and software, and a set of 9×9mm tiles that are implanted into the brain. The scene captured by the video camera in the headgear will be sent to the vision processor - similar in size to a smartphone - where it will be processed to extract the most useful information.
The processed data will be transmitted wirelessly to complex circuitry within each implanted tile; this will convert the data into a pattern of electrical pulses, which will stimulate the brain via hair-thin microelectrodes. More than 10 years in the making, this project has the potential to stimulate growth in Australian manufacturing of brain implant systems. With additional funding, this life-changing technology will be made in Melbourne for distribution globally.
The Cortical Frontiers project involves Principal Investigator and Director of the Monash Vision Group, Professor Arthur Lowery; Professor Marcello Rosa and Dr Yan Wong from the Monash Biomedicine Discovery Institute; Professor Jeffrey Rosenfeld from The Alfred hospital; Dr Philip Lewis from Monash University's Department of Electrical and Computer Systems Engineering; and other research colleagues.
"Cortical vision prostheses aim to restore visual perception to those who have lost vision by delivering electrical stimulation to the visual cortex - the region of the brain that receives, integrates and processes visual information," Professor Lowery, also from the University's Department of Electrical and Computer Systems Engineering, said. "Our design creates a visual pattern from combinations of up to 172 spots of light (phosphenes) which provides information for the individual to navigate indoor and outdoor environments, and recognise the presence of people and objects around them."
The 'Cortical Frontiers: Commercialising brain-machine interfaces' project, led by Dr Lewis, received just more than $1 million under the Federal Government's Medical Research Future Fund (MRFF) Frontier Health and Medical Research Program, announced by Health Minister The Hon Greg Hunt in June 2019, to advance the technology and put forward a detailed plan for future investment. The announcement of the second stage of MRFF funding, due to occur later this year, will support the best one or two applications with millions of dollars in funding across the next five years.
"If successful, the MVG team will look to create a new commercial enterprise focused on providing vision to people with untreatable blindness and movement to the arms of people paralysed by quadriplegia, transforming their health care," Dr Lewis said.
Dr Wong said: "The commercialisation of the bionic vision technology also ties in nicely to our plans for exploring further applications beyond vision and spinal cord injury, such as the moderation of epilepsy and depression, brain-controlled prosthetics, and the restoration of other vital senses. It aligns with our capabilities in neurobionics at Monash University, and having an engaged industry partner to work alongside will be of enormous value."
Professor Rosa said beyond improving health care and restoring vision to the blind, commercial success could see the creation of new export opportunities, highly skilled manufacturing and medical device design jobs, and economic growth for Australia. "With extra investment, we'll be able to manufacture these cortical implants here in Australia at the scale needed to progress to human trials," Professor Rosa said.
This comes on the back of a recent successful trial on sheep, with findings published in the international Journal of Neural Engineering in July. The work represents one of the first long-term tests of a fully implantable cortical vision prosthesis in the world. In preclinical studies, 10 arrays (seven active and three passive) were implanted using a purpose-built insertion system. Stimulation was delivered through the seven active devices for up to nine months. Cumulatively, more than 2,700 hours of stimulation was performed without any observable adverse health effects.
"The study results indicate that long-term stimulation through wireless arrays can be achieved without induction of widespread tissue damage, nor visible behavioural issues or seizures resulting from the stimulation," lead author of the study, Professor Rosenfeld, said.
Disclaimer: All studies complied with the Australian Code of Practice for the Care and Use of Animals for Scientific Purposes and were approved by the Animal Ethics Committee of Monash University.
Source and top image: Monash University