Flexible Electronics Make Their Way into the Operating Room 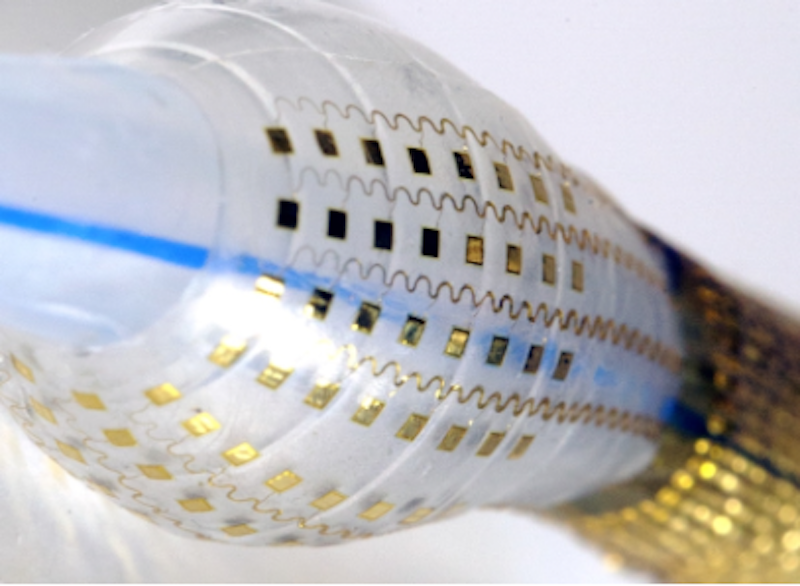 A research team led by engineers at the George Washington University and Northwestern University has developed a new surgical tool containing advanced flexible electronics that could improve diagnosis and treatment of cardiac diseases.
Balloon catheters are often used during minimally invasive surgery or ablation procedures, where they are relied upon to carry out measurements and perform therapeutic functions when inserted through small incisions. They can also be inserted into the heart to treat cardiac arrhythmias by locating and ablating the region of tissue causing the arrhythmia. Currently, however, most balloon catheters are rigid, which means they cannot conform well to the soft surfaces in the heart. In addition, these devices can only perform one function at a time, requiring doctors to use multiple catheters throughout a procedure. For further information see the IDTechEx report on Flexible Electronics in Healthcare 2020-2030.
Using their experience in flexible and stretchable electronics, the researchers sought to create an elastic system that conforms to tissue surfaces and can act as both a diagnostic and therapeutic device in one.
Flexible arrangements
The device is made up of stretchable gold interconnects sandwiched between a flexible polyimide sheet to form a flexible surface. The catheter is not only flexible but can also stretch up to 30% in both directions without causing damage to the material.
The researchers employed existing manufacturing techniques commonly used in the semiconductor industry to produce each array on a temporary silicon wafer. They then transferred the arrays to the soft elastomeric surface.
One of the features that makes this catheter unique is its multilayer design, with each layer having a unique purpose. The layer on the outside, in contact with the skin, contains electrodes that carry out electrical readings and electrical stimulation of tissues. The next layer down, separated by an insulating layer of polyimide, contains temperature sensors. These could allow surgeons to track changes in temperature of tissues in specific areas. Finally, at the bottom is a layer containing pressure sensors, which measure local forces between heart tissue and the device.
New device could change surgery
The team tested the balloon catheter using computational models, plastic heart models, and real human and animal hearts. They found that the catheter had advantages over current devices in both physical form and functionality.
The multilayered nature of the new catheter means that a wide range of diagnostic and therapeutic functions can be integrated into one device, allowing doctors to perform several measurements simultaneously and map them to specific areas. This opens up the possibility that the device could automatically regulate properties like temperature throughout surgery.
"We have taken new breakthrough materials and fabrication techniques typically employed by the semiconductor industry and applied them to the medical field, in this case cardiology, to advance a new class of medical instruments that will improve cardiac outcomes for patients and allow physicians to deliver better, safer and more patient-specific care," says Igor Efimov, a senior author of the study.
Source and top image: Institute of Physics