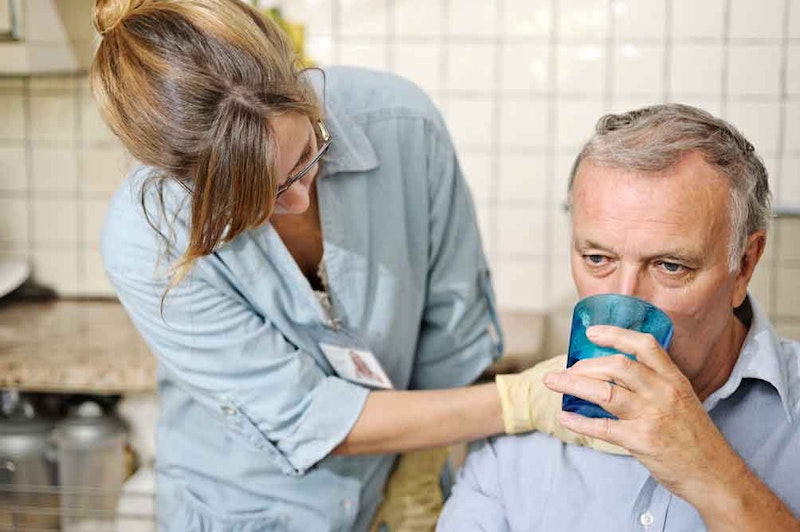 Using electrical stimulation in the throats of patients recovering from conditions such as strokes or head injuries will help to relieve swallowing problems, leading to a quicker recovery time, according to a new study.
People with neurological conditions, such as stroke and head injury, often have problems with swallowing food and drinking safely, which is called "neurogenic dysphagia". Unfortunately there are few effective treatments and many people subsequently develop pneumonia, which leads to extended stays in hospital and many even die.
In response to this, a group of experts carried out PHADER - the largest-ever study testing whether electrical stimulation of the back of the throat (pharynx), using a treatment catheter, would improve swallowing in people with a recent stroke or head injury, or who had been in an intensive care unit and needed ventilation. The study was a collaborative project between experts at the Universities of Nottingham and Manchester and the University of Münster in Germany, and was funded by Phagenesis - a company dedicated to the treatment of dysphagia. For further information see the IDTechEx report on Bioelectronic Medicine 2019-2029.
The observational study recruited 255 patients from 14 different centres in Austria, Germany and the UK, with five different neurological conditions. Electrical stimulation was administered once daily for three days, and the outcome was then measured on the severity of the dysphagia at three months. The findings of the research, published today in EClinicalMedicine, showed that most people's swallowing problems improved, and so allowing feeding tubes to be removed and for patients to be discharged from hospital.
The treatment catheters were easy to insert into the back of the throat and no serious complications attributable to the treatment occurred.
"PHADER is the largest-ever study of electrical stimulation, and our findings show that most people's swallowing problems improved after receiving the treatment, which is a potential game changer for patients with severe swallowing problems who previously were at risk of complications including pneumonia. It will also mean quicker discharge from hospital for these patients." said Professor Philip Bath from the School of Medicine at the University of Nottingham, and co-lead investigator on the study.
Professor Shaheen Hamdy from The University of Manchester and co-lead Investigator said: "This study shows conclusively that electrical stimulation of the throats of these patients can help improve their ability to swallow safely and that is tremendously exciting. We clearly show the device is easy to use, safe and most critically, impacts on swallowing recovery in a range of disorders, which could make a major difference to patients' quality of life. We feel this constitutes a new avenue for treatment in this sometimes life-threatening condition and are looking forward to seeing this technology go from strength to strength."
Professor Rainer Dziewas from the University of Münster and co-lead Investigator said: "These results are fascinating since most patients were treated in a chronic state of the illness, where it is usually extremely difficult to achieve any treatment success. PHADER clearly suggests that electrical stimulation may help even in this notoriously difficult situation. However, it is important to mention that patients with dysphagia should be treated as early as possible for best outcomes."
Reinhard Krickl, CEO Phagenesis, said: "PHADER not only confirms the very encouraging outcomes of previous studies in stroke patients, but also demonstrates that patients suffering from dysphagia after brain injury, or who had been in an intensive care unit and needed long periods of ventilation, will benefit from electrical stimulation using our treatment system, Phagenyx®. We have even just recently learned that our treatment can improve swallowing in critically-ill COVID-19 patients after weeks of mechanical ventilation. In times of crisis like in the current global pandemic, this could be incredibly important in helping patients with life-threatening dysphagia recover faster allowing medical teams to make ICU resources available for other patients much faster."
Follow Global Biotech Insights for more news.
Source: University of Nottingham