Brain Injuries can be Unbroken by Innovative Neuro-Technologies 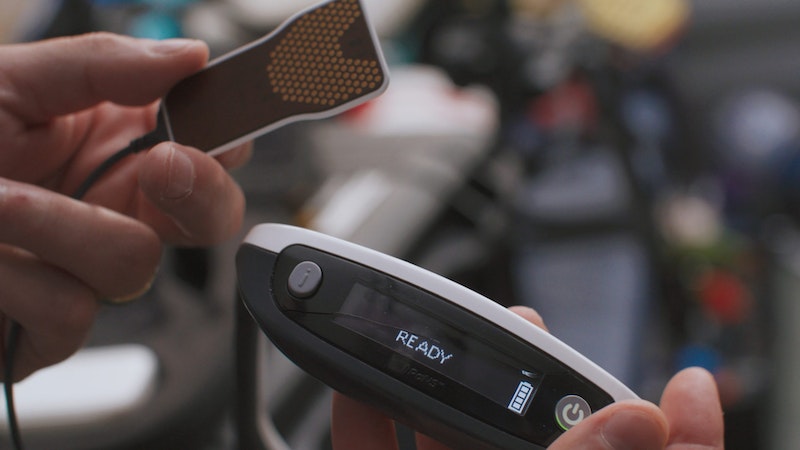 A recently published scientific study led by the Centre for Neurology Studies at HealthTech Connex and a research team from Simon Fraser University (SFU) reports the latest breakthroughs from Project Iron Soldier. Captain (retired) Trevor Greene, who was attacked with an axe to the head while serving in Afghanistan, continues to disrupt conventional limits in recovery after brain injury. The internationally renowned research, led by neuroscientist Dr. Ryan C. N. D'Arcy, involves tracking Capt. Greene's neuroplasticity as he rewires his brain using the latest and most advanced brain technologies.
Just a month before a global pandemic was declared, Capt. Greene and Dr. D'Arcy recounted their remarkable progress and showcased their mission to lead scientific breakthroughs in neuroplasticity through a recent TEDx talk. In a time when COVID-19 is increasingly being linked to brain health, the scientific results from Project Iron Soldier brings hope and optimism in the form of a peer reviewed study, published in Frontiers of Human Neuroscience, on Capt. Greene's physical, cognitive and PTSD improvements. For further information see the IDTechEx report on Bioelectronic Medicine 2019-2029.
In 2006, retired Canadian soldier Capt. Greene survived a severe, open-traumatic brain injury when he was attacked with an axe to the head, during his combat tour in Afghanistan. He spent years in various therapies and rehabilitation, and in 2009, he started working with Dr. D'Arcy to track his progress. In 2015, the B.C. and Yukon Command of the Royal Canadian Legion helped outfit Trevor with a robotic exoskeleton, which helped him continue re-learning to walk. Called Project Iron Soldier, this exciting initiative was the inspiration to develop the Legion Veterans Village, a $312M Centre of Excellence for PTSD, mental health and rehabilitation dedicated to veterans and first responders (currently under construction in Surrey).
Capt. Greene and the Project Iron Soldier research team have continued with intensive daily rehabilitation, but the team experienced an extended plateau in progress using conventional therapy alone. To break through the plateau, the Centre for Neurology Studies launched an intensive 14-week study using the Portable Neuromodulation Stimulator (or PoNS™) in combination with physical therapy to safely stimulate novel neuroplasticity and tracked brain vital sign improvements using NeuroCatch® Platform (or NeuroCatch®).
The PoNS is a neuromodulation technology that sends a series of small electrical impulses to the brain by stimulating the tongue (known as translingual neurostimulation). NeuroCatch is a rapid objective measure of cognitive brain function. A number of published clinical studies demonstrate applications for both the PoNS and NeuroCatch for brain injury, with the current case study highlighting the real-world application to push the limits of recovery in physical abilities, cognitive processing, and PTSD symptoms.
"Our team has been leading clinical research to develop and validate advanced brain technologies like the PoNS and NeuroCatch Platform for a few years and have seen incredible results in terms of improved brain health and well-being," says Dr. D'Arcy, co-founder of HealthTech Connex, which operates the Centre for Neurology Studies, and an SFU professor. "When Trevor experienced a plateau in his rehabilitation, we tried intensive conventional treatment approaches, but to no avail. It was only after combining stimulation with the PoNS device with his rehabilitation therapy that we could break through these barriers and demonstrate significant clinical improvements."
Results of the study: The newly published results demonstrate that PoNS neurostimulation, paired with intensive rehabilitation, may stimulate neuroplasticity to overcome an extended recovery plateau in this case as objectively measured by NeuroCatch and other brain scanning technologies. The main findings were:
Dr. D'Arcy describes the study results: "We were fascinated to see that, while the focus was physical therapy, NeuroCatch scans detected cognitive improvements and Trevor and his wife Debbie reported greatly reduced PTSD symptoms. My favorite line in this published paper was when Debbie closed the study by saying, 'I got my superman back.' In our COVID-19 era, when we are all concerned about the recent links to brain health, it is breakthroughs like this that bring continued hope for science and technology advances."
Says Capt. Greene, "I first saw the power of neuroplasticity in the early days of the first study involving the MRI. I was blown away when Ryan showed me images of my brain with coloured splotches showing where my healthy brain tissue was taking over for the damaged bits. Later on, I saw the full power of the PoNS device when I got demonstrably stronger, steadier and more coordinated after using it regularly for just a few weeks. It's really been a game changer for me and my family."
"Trevor's amazing progress is no doubt pushing the frontiers of medical science by overcoming perceived limits of brain recovery," says Dr. Shaun Fickling, the study's lead author who completed his PhD at Simon Fraser University. "These brain imaging results provide valuable insight into the importance of unleashing the power of neuroplasticity to inspire countless people impacted by brain and mental health conditions."
Dr. D'Arcy concludes, "These neuro-technology breakthroughs have considerable impacts to inspire many of us to push beyond conventional limits in neurological and mental health recovery. For our veterans and first responders, who remain resilient in the face of frequent exposure to trauma, this research and science underpins the inspiration for our newly developed Legion Veterans Village, to give back through a Centre of Excellence in PTSD, mental health, and rehabilitation."
Follow Global Biotech Insights for more news.
Source and top image: HealthTech Connex