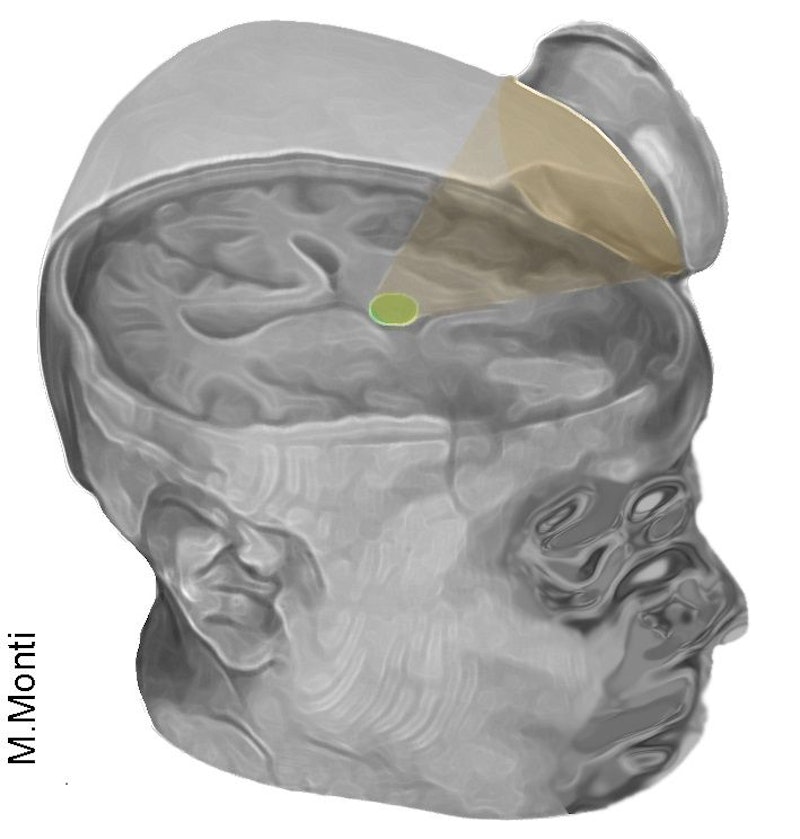 In 2016, a team led by UCLA's Martin Monti reported that a 25-year-old man recovering from a coma had made remarkable progress following a treatment to jump-start his brain using ultrasound. At the time, Monti acknowledged that although he was encouraged by the outcome, it was possible the scientists had gotten a little lucky. Now, Monti and colleagues report that two more patients with severe brain injuries — both had been in what scientists call a long-term "minimally conscious state" — have made impressive progress thanks to the same technique. The results are published online in the journal Brain Stimulation.
"I consider this new result much more significant because these chronic patients were much less likely to recover spontaneously than the acute patient we treated in 2016 — and any recovery typically occurs slowly over several months and more typically years, not over days and weeks, as we show," said Monti, a UCLA professor of psychology and neurosurgery and co-senior author of the new paper. "It's very unlikely that our findings are simply due to spontaneous recovery."
The paper notes that, of three people who received the treatment, one — a 58-year-old man who had been in a car accident five-and-a-half years prior to treatment and was minimally conscious — did not benefit. However, the other two did. For further information see the IDTechEx report on Bioelectronic Medicine 2019-2029.
One is a 56-year-old man who had suffered a stroke and had been in a minimally conscious state, unable to communicate, for more than 14 months. After the first of two treatments, he demonstrated, for the first time, the ability to consistently respond to two distinct commands — the ability to drop or grasp a ball, and the ability to look toward separate photographs of two of his relatives when their names were mentioned. He also could nod or shake his head to indicate "yes" or "no" when asked questions such as "Is X your name?" and "Is Y your wife's name?"
Small but significant improvement
In the days following the second treatment, he also demonstrated, for the first time since the stroke, the ability to use a pen on paper and to raise a bottle to his mouth, as well as to communicate and answer questions.
"Importantly," Monti said, "these behaviors are diagnostic markers of emergence from a disorder of consciousness."
The other patient who improved is a 50-year-old woman who had been in even less of a conscious state for more than two-and-a-half years following cardiac arrest. In the days after the first treatment, she was able, for the first time in years, according to her family, to recognize a pencil, a comb and other objects.
Both patients showed the ability to understand speech.
"What is remarkable is that both exhibited meaningful responses within just a few days of the intervention," Monti said. "This is what we hoped for, but it is stunning to see it with your own eyes. Seeing two of our three patients who had been in a chronic condition improve very significantly within days of the treatment is an extremely promising result."
The changes the researchers saw are small, but Monti said even the smallest form of communication means a way to reconnect. One powerful moment during the study was when the wife of the 56-year-old man showed him photos and asked whether he recognized who he saw.
"She said to us, 'This is the first conversation I had with him since the accident,'" Monti said. "For these patients, the smallest step can be very meaningful — for them and their families. To them it means the world."
Using acoustic energy
The scientists used a technique called low-intensity focused ultrasound, which uses sonic stimulation to excite the neurons in the thalamus, an egg-shaped structure that serves as the brain's central hub for processing. After a coma, thalamus function is typically weakened, Monti said. Doctors use a device about the size of a saucer creates a small sphere of acoustic energy they can aim at different brain regions to excite brain tissue. The researchers placed the device by the side of each patient's head and activated it 10 times for 30 seconds each in a 10-minute period. Each patient underwent two sessions, one week apart.
Monti hopes to eventually translate the technology into an inexpensive, portable device so the treatment could be delivered not only at state-of-the-art medical centers, but also at patients' homes, to help "wake up" patients from a minimally conscious or vegetative state. The treatment appears to be well tolerated; the researchers saw no changes to the patients' blood pressure, heart rate or blood oxygen levels, and no other adverse events. Monti said the device is safe because it emits only a small amount of energy, less than a conventional Doppler ultrasound.
While the scientists are excited by the results, they emphasize that the technique is still experimental and likely will not be available to the public for at least a few years. For now, there is little that can be done to help patients recover from a severe brain injury that results in either a chronic vegetative state or a minimally conscious state, Monti said. Monti said his team is planning additional studies to learn exactly how thalamic ultrasound modifies brain function; he hopes to start those clinical trials once the researchers and patients are assured of being safe from COVID-19.
The study's lead author is Josh Cain, a UCLA graduate student in psychology, and a co-senior author is Caroline Schnakers, a former UCLA researcher who is now assistant director of research at Casa Colina Hospital and Centers for Healthcare in Pomona, California. The work was funded by the Tiny Blue Dot Foundation and the Dana Foundation.
Source and top image: UCLA