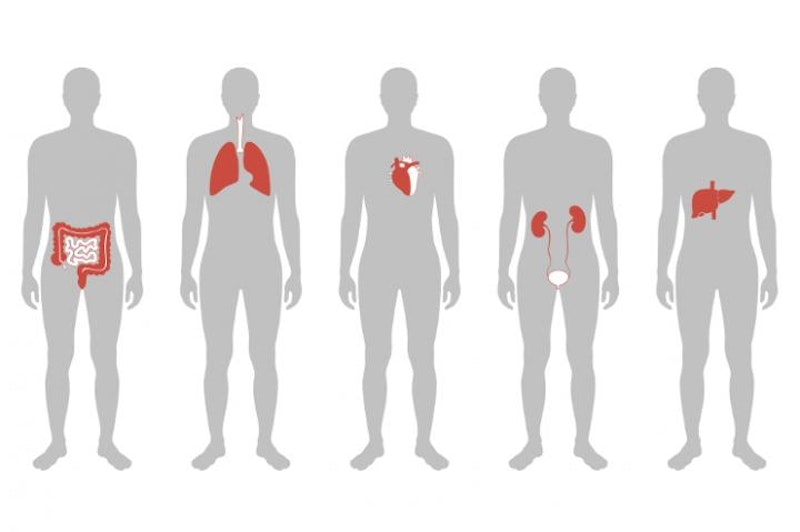 The genome editing technology CRISPR has emerged as a powerful new tool that can change the way we treat disease. The challenge when altering the genetics of our cells, however, is how to do it safely, effectively, and specifically targeted to the gene, tissue and organ that needs treatment. Scientists at Tufts University and the Broad Institute of Harvard and MIT have developed unique nanoparticles comprised of lipids -- fat molecules -- that can package and deliver gene editing machinery specifically to the liver. In a study published in the Proceedings of the National Academy of Sciences, they have shown that they can use the lipid nanoparticles (LNPs) to efficiently deliver the CRISPR machinery into the liver of mice, resulting in specific genome editing and the reduction of blood cholesterol levels by as much as 57% -- a reduction that can last for at least several months with just one shot.
The problem of high cholesterol plagues more than 29 million Americans, according to the Centers for Disease Control and Prevention. The condition is complex and can originate from multiple genes as well as nutritional and lifestyle choices, so it is not easy to treat. The Tufts and Broad researchers, however, have modified one gene that could provide a protective effect against elevated cholesterol if it can be shut down by gene editing. For further information see the IDTechEx report on Synthetic Biology 2018.
The gene that the researchers focused on codes for the angiopoietin-like 3 enzyme (Angptl3). That enzyme tamps down the activity of other enzymes - lipases - that help break down cholesterol. If researchers can knock out the Angptl3 gene, they can let the lipases do their work and reduce levels of cholesterol in the blood. It turns out that some lucky people have a natural mutation in their Angptl3 gene, leading to consistently low levels of triglycerides and low-density lipoprotein (LDL) cholesterol, commonly called "bad" cholesterol, in their bloodstream without any known clinical downsides.
"If we can replicate that condition by knocking out the angptl3 gene in others, we have a good chance of having a safe and long term solution to high cholesterol," said Qiaobing Xu, associate professor of biomedical engineering at Tufts' School of Engineering and corresponding author of the study. "We just have to make sure we deliver the gene editing package specifically to the liver so as not to create unwanted side effects."
Xu's team was able to do precisely that in mouse models. After a single injection of lipid nanoparticles packed with mRNA coding for CRISPR-Cas9 and a single-guide RNA targeting Angptl3, they observed a profound reduction in LDL cholesterol by as much as 57% and triglyceride levels by about 29 %, both of which remained at those lowered levels for at least 100 days. The researchers speculate that the effect may last much longer than that, perhaps limited only by the slow turnover of cells in the liver, which can occur over a period of about a year. The reduction of cholesterol and triglycerides is dose dependent, so their levels could be adjusted by injecting fewer or more LNPs in the single shot, the researchers said.
By comparison, an existing, FDA-approved version of CRISPR mRNA-loaded LNPs could only reduce LDL cholesterol by at most 15.7% and triglycerides by 16.3% when it was tested in mice, according to the researchers.
The trick to making a better LNP was in customizing the components - the molecules that come together to form bubbles around the mRNA. The LNPs are made up of long chain lipids that have a charged or polar head that is attracted to water, a carbon chain tail that points toward the middle of the bubble containing the payload, and a chemical linker between them. Also present are polyethylene glycol, and yes, even some cholesterol - which has a normal role in lipid membranes to make them less leaky - to hold their contents better.
The researchers found that the nature and relative ratio of these components appeared to have profound effects on the delivery of mRNA into the liver, so they tested LNPs with many combinations of heads, tails, linkers and ratios among all components for their ability to target liver cells. Because the in vitro potency of an LNP formulation rarely reflects its in vivo performance, they directly evaluated the delivery specificity and efficacy in mice that have a reporter gene in their cells that lights up red when genome editing occurs. Ultimately, they found a CRISPR mRNA-loaded LNP that lit up just the liver in mice, showing that it could specifically and efficiently deliver gene-editing tools into the liver to do their work.
The LNPs were built upon earlier work at Tufts, where Xu and his team developed LNPs with as much as 90% efficiency in delivering mRNA into cells. A unique feature of those nanoparticles was the presence of disulfide bonds between the long lipid chains. Outside the cells, the LNPs form a stable spherical structure that locks in their contents. When they are inside a cell, the environment within breaks the disulfide bonds to disassemble the nanoparticles. The contents are then quickly and efficiently released into the cell. By preventing loss outside the cell, the LNPs can have a much higher yield in delivering their contents.
"CRISPR is one of the most powerful therapeutic tools for the treatment of diseases with a genetic etiology. We have recently seen the first human clinical trail for CRISPR therapy enabled by LNP delivery to be administered systemically to edit genes inside the human body. Our LNP platform developed here holds great potential for clinical translation," said Min Qiu, post-doctoral researcher in Xu's lab at Tufts."We envision that with this LNP platform in hand, we could now make CRISPR a practical and safe approach to treat a broad spectrum of liver diseases or disorders," said Zachary Glass, graduate student in the Xu lab. Qiu and Glass are co-first authors of the study.
Source and top image: Tufts University