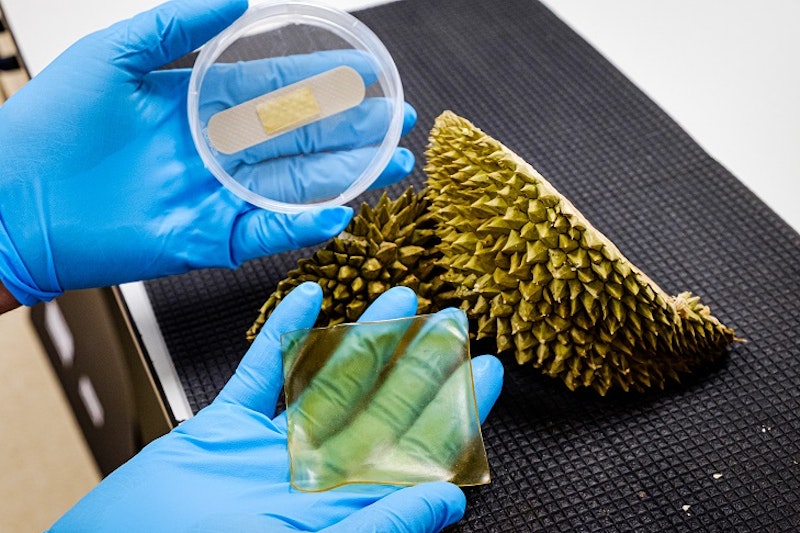 Food scientists from Nanyang Technological University, Singapore (NTU Singapore) have made an antibacterial gel bandage using the discarded husks of the popular tropical fruit, durian.
Known as the "King of Fruits" in Southeast Asia, the durian has a thick husk with spiky thorns which is discarded, while the sweet flesh surrounding the seeds on the inside is considered a delicacy. By extracting high-quality cellulose from the durian husks and combining it with glycerol - a waste by-product from the biodiesel and soap industry - NTU scientists created a soft gel, similar to silicon sheets, which can be cut into bandages of various shapes and sizes. They then added the organic molecules produced from baker's yeast known as natural yeast phenolics, making the bandage deadly to bacteria.
Conventional hydrogel patches are commonly available at pharmacies, usually used to cover wounds from surgery to minimise the formation of excessive scar tissue, resulting in a softer and flatter scar. The patch keeps the skin hydrated instead of drying up when conventional band-aid or gauze bandages are used. For further information see the IDTechEx report on Advanced Wound Care Technologies 2020-2030.
Prof Chen said conventional hydrogel patches on the market are made from synthetic materials such as polymers like polymethacrylate and polyvinylpyrrolidine. Those with antimicrobial properties also use metallic compounds such as silver or copper ions. Such synthetic materials approved for use in biomedical applications are more costly as compared to the new hydrogel made from natural waste materials.
"With the growing threat of antibiotic-resistant superbugs, the world will need multiple alternative ways to prevent infections. An effective way to protect open wounds is with antimicrobial bandages that are biocompatible and safe for prolonged use by humans. This is especially important for diabetic patients suffering from chronic wounds," explained Prof Chen, the Michael Fam Chair Professor in Food Science and Technology at the School of Chemical and Biomedical Engineering. "By using waste products which are currently discarded in large quantities - durian husks and glycerol - we could turn waste into a valuable biomedical resource that can enhance the speedy recovery of wounds and to reduce chances of infections."
With the husk comprising 60 per cent of the durian it is usually discarded and incinerated, posing an environmental issue. In Singapore, it was reported by The Straits Times that 14,300 tonnes of durian (estimated 10 million durians) were imported and consumed in 2017. Being non-toxic and biodegradable, the organic gel bandage is also expected to have a smaller environmental footprint than conventional synthetic bandages.
Giving an independent comment on this innovation, Associate Professor Andrew Tan, Vice Dean (Faculty) from NTU's Lee Kong Chian School of Medicine, who is an expert in metabolic disorders, said there are existing natural and synthetic hydrogels on the market now, where their usefulness in the healing of some types of wounds are well-recognised.
"Hydrogel bandages are known for their non-toxicity, ability to rehydrate the wound bed, and can facilitate autolytic debridement (where the body enzymes and natural fluids act to soften bad tissue and remove it). The innovative and unique part of Prof Chen's current work is the upcycling of the durian rind to obtain cellulose. It's also quite unique given that the thorns of the durian can hurt, but the materials from the rind can heal," Assoc Prof Tan said.
Why antimicrobial wound dressings are needed
Wounds linked to chronic diseases are expected to become a more common health burden, where bacterial infection of skin wounds is a serious risk. The market for wound dressing is estimated to be worth $11.4 billion annually, according to a paper published in the European Polymer Journal (A. Gupta et al, 2019). The clinical advantage of the new hydrogel bandage is that the natural yeast phenolics embedded will help to prevent the growth of bacteria such as Gram-negative E. coli and Gram-positive S. aureus. and the subsequent formation of biofilms (a layer of slime that can lead to antimicrobial resistance within a bacteria colony).
As a proof of concept, the antimicrobial hydrogels were tested as a wound dressing on animal skin and showed good antimicrobial effects for up to 48 hours. The new proof-of-concept hydrogel bandage is applied by simply laying it across the wound, just as with existing commercially available silicone gel sheets for wound dressing, the current gold-standard used following cosmetic surgeries to reduce scarring.
Other applications of hydrogels
Organic hydrogels are also useful for wearable, flexible and stretchable electronics, which Prof Chen had demonstrated in a 2019 paper published in Scientific Reports. Wearable electronics can consist of small sensors that can detect heart rate and physical activities, much like current smart bands. They could aid healthcare workers in monitoring the health of the elderly in remote communities.
To demonstrate the use of organic hydrogels in flexible electronics, a prototype hydrogel that could conduct electrical signals was made with cellulose obtained from Okara - the waste leftover from soybean pulp during the making of soy milk.
"As shown in many of our research papers, fundamental research in food science and technology carries far more interdisciplinary applications in other industries, such as healthcare, biomedical applications and speciality chemicals," Prof Chen added. "Our innovation is in line with the NTU 2025 strategic plan, where research and innovation are key pillars of focus in tackling some of humanity's greatest challenges. By adopting a waste-to-resource approach and the use of green manufacturing techniques, we have shown that it is possible to reduce consumption of Earth's natural resources, reuse what was thought of as rubbish, and recycle them into valuable products that are useful for mankind."
The team of four NTU researchers took two years to research and publish their findings and is now looking for industry partners who may be keen to take their antibacterial gel bandage to market.
Source and top image: Nanyang Technological University of Singapore