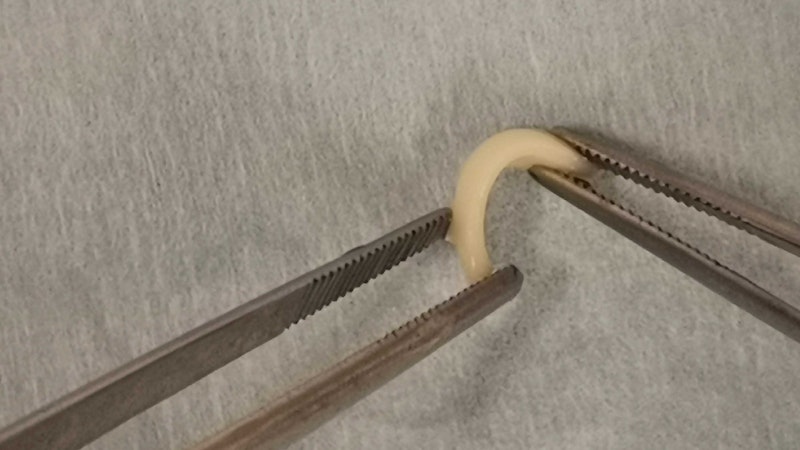 A team of University of Alberta researchers has discovered a way to use 3D bioprinting technology to create custom-shaped cartilage for use in surgical procedures. The work aims to make it easier for surgeons to safely restore the features of skin cancer patients living with nasal cartilage defects after surgery. The researchers used a specially designed hydrogel—a material similar to Jell-O—that could be mixed with cells harvested from a patient and then printed in a specific shape captured through 3D imaging. Over a matter of weeks, the material is cultured in a lab to become functional cartilage.
"It takes a lifetime to make cartilage in an individual, while this method takes about four weeks. So you still expect that there will be some degree of maturity that it has to go through, especially when implanted in the body. But functionally it's able to do the things that cartilage does," said Adetola Adesida, a professor of surgery in the Faculty of Medicine & Dentistry. For further information see the IDTechEx report on 3D Bioprinting 2018 - 2028: Technologies, Markets, Forecasts.
"It has to have certain mechanical properties and it has to have strength. This meets those requirements with a material that (at the outset) is 92 per cent water," added Yaman Boluk, a professor in the Faculty of Engineering.
Adesida, Boluk and graduate student Xiaoyi Lan led the project to create the 3-D printed cartilage in hopes of providing a better solution for a clinical problem facing many patients with skin cancer.
Each year upwards of three million people in North America are diagnosed with non-melanoma skin cancer. Of those, 40 per cent will have lesions on their noses, with many requiring surgery to remove them. As part of the procedure, many patients may have cartilage removed, leaving facial disfiguration. Traditionally, surgeons would take cartilage from one of the patient's ribs and reshape it to fit the needed size and shape for reconstructive surgery. But the procedure comes with complications.
"When the surgeons restructure the nose, it is straight. But when it adapts to its new environment, it goes through a period of remodelling where it warps, almost like the curvature of the rib," said Adesida. "Visually on the face, that's a problem. The other issue is that you're opening the rib compartment, which protects the lungs, just to restructure the nose. It's a very vital anatomical location. The patient could have a collapsed lung and has a much higher risk of dying," he added.
The researchers say their work is an example of both precision medicine and regenerative medicine. Lab-grown cartilage printed specifically for the patient can remove the risk of lung collapse, infection in the lungs and severe scarring at the site of a patient's ribs.
"This is to the benefit of the patient. They can go on the operating table, have a small biopsy taken from their nose in about 30 minutes, and from there we can build different shapes of cartilage specifically for them," said Adesida. "We can even bank the cells and use them later to build everything needed for the surgery. This is what this technology allows you to do."
The team is continuing its research and is now testing whether the lab-grown cartilage retains its properties after transplantation in animal models. The team hopes to move the work to a clinical trial within the next two to three years.
Source and top image: University of Alberta