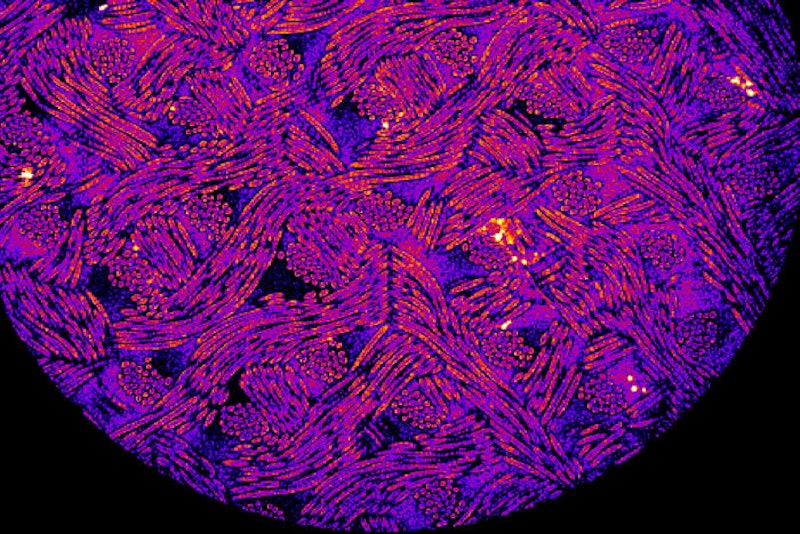 With a goal of developing rheumatoid arthritis therapies with minimal side effects, researchers at Washington University School of Medicine in St. Louis have genetically engineered cells that, when implanted in mice, will deliver a biologic drug in response to inflammation. The engineered cells reduced inflammation and prevented a type of damage to bone, known as bone erosion, in a mouse model of rheumatoid arthritis. The research team's ultimate aim is to develop therapies for people coping with rheumatoid arthritis, a debilitating condition that affects about 1.3 million adults in the United States.
"Doctors often treat patients who have rheumatoid arthritis with injections or infusions of anti-inflammatory biologic drugs, but those drugs can cause significant side effects when delivered long enough and at high enough doses to have beneficial effects," said senior investigator Farshid Guilak, PhD, the Mildred B. Simon Professor of Orthopaedic Surgery. "We used CRISPR technology to reprogram the genes in stem cells. Then we created a small cartilage implant by seeding the cells on woven scaffolds, and we placed them under the skin of mice. The approach allows those cells to remain in the body for a long time and secrete a drug whenever there is a flare of inflammation." The new findings are published online Sept. 1 in the journal Science Advances. For further information see the IDTechEx report on Synthetic Biology 2018.
The researchers used CRISPR-Cas9 genome editing technology to make cells that secrete a biologic drug in response to inflammation. The drug reduces inflammation in joints by binding to interleukin-1 (IL-1), a substance that often promotes inflammation in arthritis by activating inflammatory cells in a joint.
Guilak, a co-director of the Washington University Center of Regenerative Medicine, and his team previously developed scaffolding that they coat with stem cells and then implant into joints to form cartilage. The strategy allows the researchers to implant the engineered cartilage cells in such a way that they don't drift away after a few days and can survive for months or longer. His lab also previously built so-called SMART cartilage cells (Stem cells Modified for Autonomous Regenerative Therapy) using CRISPR-Cas9 technology to alter genes in those cells so that when the genes in the cartilage are activated by inflammation, they secrete drugs in response.
In the new study, Guilak's team combined the strategies to provide treatment for rheumatoid arthritis.
"The cells sit under the skin or in a joint for months, and when they sense an inflammatory environment, they are programmed to release a biologic drug," said Guilak, also director of research at Shriners Hospitals for Children — St. Louis.
In this case, the drug was similar to the immunosuppressant drug anakinra, which binds to IL-1 and blocks its activity. Interestingly, that drug isn't used frequently to treat rheumatoid arthritis because it has a short half-life and doesn't linger in the body for long. But in this study in mice, the drug reduced inflammation and prevented bone damage often seen in rheumatoid arthritis.
"We focused on bone erosion because that is a big problem for patients with rheumatoid arthritis, which is not effectively treated by current biologics" said co-first author Yunrak Choi, MD, a visiting orthopedic surgeon in the Guilak lab. "We used imaging techniques to closely examine bones in the animals, and we found that this approach prevented bone erosion. We're very excited about this advance, which seems to meet an important unmet clinical need."
Guilak collaborated with Christine Pham, MD, director of the Division of Rheumatology and the Guy and Ella Mae Magness Professor of Medicine.
"Although biologics have revolutionized the treatment of inflammatory arthritis, the continuous administration of these drugs often leads to adverse events, including an increased risk of infection," Pham explained. "The idea of delivering such drugs essentially on demand in response to arthritis flares is extremely attractive to those of us who work with arthritis patients, because the approach could limit the adverse effects that accompany continuous high-dose administration of these drugs."
With CRISPR-Cas9 gene editing, cells have the potential to be programmed to make all sorts of drugs, meaning that if one arthritis drug works better than another in a particular patient, the researchers could engineer cartilage cells to make personalized treatments. The strategy has great potential to treat other inflammatory arthritis conditions, including juvenile arthritis, a condition that affects more than 300,000 children in the United States.
"Many arthritis patients have to self-administer these drugs, giving themselves injections daily, weekly or biweekly, while others go to a doctor's office every few months to receive an infusion of one of these biologics, but in this study, we've demonstrated that we can make living tissue into a drug-delivery system," said Kelsey H. Collins, PhD, a postdoctoral research associate in Guilak's lab and co-first author of the study. "These cells can sense problems and respond by producing a drug. This approach also helps us understand why certain biologics may have limited effects in inflammatory arthritis. It's not because they don't bind to the right target but likely because an injected drug is short-lived compared to the automatically controlled levels of drug released by implanted SMART cells."
The researchers are continuing to experiment with CRISPR-Cas9 and stem cells, even engineering cells that might manufacture more than one drug to respond to different triggers for inflammation.
Source and top image: Washington University School of Medicine in At Louis