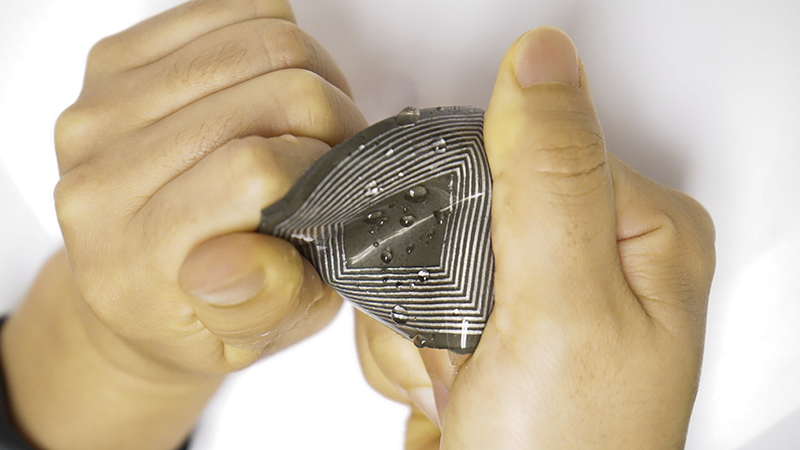 A team of bioengineers at the UCLA Samueli School of Engineering has invented a novel soft and flexible self-powered bioelectronic device. The technology converts human body motions — from bending an elbow to subtle movements such as a pulse on one's wrist — into electricity that could be used to power wearable and implantable diagnostic sensors.
The researchers discovered that the magnetoelastic effect, which is the change of how much a material is magnetized when tiny magnets are constantly pushed together and pulled apart by mechanical pressure, can exist in a soft and flexible system — not just one that is rigid. To prove their concept, the team used microscopic magnets dispersed in a paper-thin silicone matrix to generate a magnetic field that changes in strength as the matrix undulated. As the magnetic field's strength shifts, electricity is generated. Nature Materials published a research study detailing the discovery, the theoretical model behind the breakthrough and the demonstration. The research is also highlighted by Nature.
"Our finding opens up a new avenue for practical energy, sensing and therapeutic technologies that are human-body-centric and can be connected to the Internet of Things," said study leader Jun Chen, an assistant professor of bioengineering at UCLA Samueli. "What makes this technology unique is that it allows people to stretch and move with comfort when the device is pressed against human skin, and because it relies on magnetism rather than electricity, humidity and our own sweat do not compromise its effectiveness."
Chen and his team built a small, flexible magnetoelastic generator (about the size of a U.S. quarter) made of a platinum-catalyzed silicone polymer matrix and neodymium-iron-boron nanomagnets. They then affixed it to a subject's elbow with a soft, stretchy silicone band. The magnetoelastic effect they observed was four times greater than similarly sized setups with rigid metal alloys. As a result, the device generated electrical currents of 4.27 milliamperes per square centimeter, which is 10,000 times better than the next best comparable technology. For further information see the IDTechEx report on Energy Harvesting for Electronic Devices 2020-2040.
In fact, the flexible magnetoelastic generator is so sensitive that it could convert human pulse waves into electrical signals and act as a self-powered, waterproof heart-rate monitor. The electricity generated can also be used to sustainably power other wearable devices, such as a sweat sensor or a thermometer.
There have been ongoing efforts to make wearable generators that harvest energy from human body movements to power sensors and other devices, but the lack of practicality has hindered such progress. For example, rigid metal alloys with magnetoelastic effect do not bend sufficiently to compress against the skin and generate meaningful levels of power for viable applications.
Other devices that rely on static electricity tend not to generate enough energy. Their performance can also suffer in humid conditions, or when there is sweat on the skin. Some have tried to encapsulate such devices in order to keep water out, but that cuts down their effectiveness. The UCLA team's novel wearable magnetoelastic generators, however, tested well even after being soaked in artificial perspiration for a week.
A patent on the technology has been filed by the UCLA Technology Development Group.
Source and top image: University of California Los Angeles