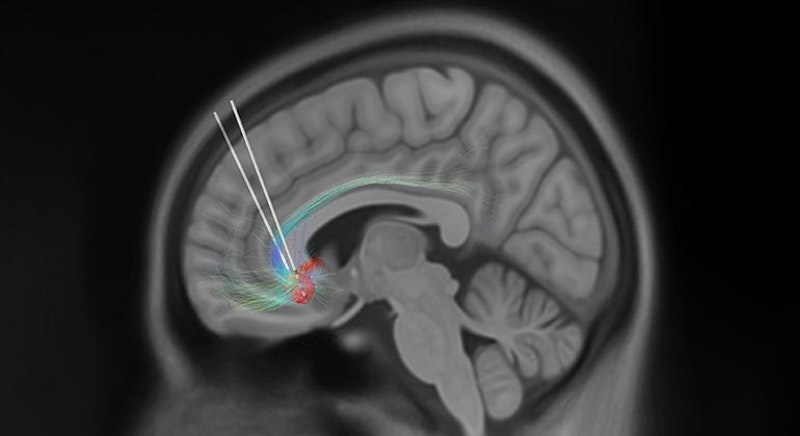 Deep brain stimulation has been demonstrated to be an effective treatment for many patients suffering with treatment-resistant depression, but exactly how it works is not known. Scientists worldwide are racing for objective biomarkers of DBS treatment efficacy so that this experimental approach can be optimized, approved and disseminated to those in need. New research published November 3 in Translational Psychiatry, presents new evidence that brief intraoperative exposure to therapeutic stimulation at the time of implantation surgery induces rapid and consistent electrophysiological brain state change - indexed by a decrease in beta power measured at the site of stimulation. These intraoperative brain state changes are seen in individual subjects and are correlated with a significant and sustained decrease in depressive symptoms outside of the operating room without additional stimulation, establishing reduction in beta power as a novel biomarker for DBS treatment optimization.
The data presented are from a collaborative study at Emory University and the Icahn School of Medicine at Mount Sinai. Led by Helen S. Mayberg, MD, Mount Sinai Professor in Neurotherapeutics and Founding Director of the Nash Family Center for Advanced Circuit Therapeutics at Mount Sinai, this research is part of an ongoing National Institutes of Health (NIH) BRAIN Initiative-funded grant. For further information see the IDTechEx report on Bioelectronic Medicine 2019-2029.
Deep brain stimulation is approved by the U.S. Food and Drug Administration to treat essential tremor, Parkinson's disease, epilepsy and obsessive-compulsive disorder. It is a neurosurgical procedure involving placement of a neurostimulator (sometimes referred to as a "brain pacemaker"), which sends high-frequency electrical impulses through implanted electrodes deep in the brain to specific areas responsible for the symptoms of each disorder. While still an experimental treatment, DBS of the subcallosal cingulate (SCC, Area 25), a brain area that has been implicated as playing a major role in depression, has been repeatedly demonstrated as a promising intervention for patients suffering from treatment-resistant depression.
Acute behavioral changes and long-term antidepressant response can be reliably elicited with stimulation of this well-defined, surgically-targeted depression circuit, using individualized neuroimaging guidance. While the clinical effectiveness of DBS over the course of six months of treatment has been repeatedly demonstrated, there are differences in the timeline of recovery across different patients. Understanding the mechanisms of these initial rapid and reproducible behavioral effects and their role in predicting the more critical long-term response trajectories will be key to effective treatment and future study design.
"What we found was that within minutes of stimulation inside the operating room, there was a change in the beta brain rhythm. Patients who showed larger changes then experienced greater relief from their depression in the week after surgery," said Allison C. Waters, PhD, Assistant Professor of Psychiatry, and Neuroscience, at Icahn Mount Sinai and co-first author of the paper. "The beta rhythm is conventionally associated with the brain's determination of whether to stop or keep going with a course of action, which is why neurologists target beta with DBS to treat disorders of movement. We haven't had a clear signal to target with DBS for depression, but now we can speculate as to how the beta signal might function in this context: a release of the brake that generates fatigue and slowness, or interrupting a habitual cycle of negative self-focused thought."
"We were able to leverage machine learning and explainable artificial intelligence approaches to explore unknown (hidden) changes in brain state that would explain the obvious behavioral changes previously observed," said Mohammad Sendi, MSc, PhD candidate in the Biomedical Engineering Department of Emory University and Georgia Institute of Technology and co-first author of the paper.
Eight treatment-resistant depression patients underwent electrophysiological recording in the operating room during their DBS lead implantation surgeries. Using patient-specific tractography models prior to surgery, investigators identified the "optimal" target within the SCC for lead placement. Stimulation was then delivered in the operating room over the course of an hour while local field potentials (LFPs)—electrical signals between neurons deep in the brain—were simultaneously recorded. A machine learning classification method was subsequently used to discriminate between intracranial LFPs recorded at baseline (stimulation-naïve) and after the first exposure to stimulation inside the operating room. Spectral inputs (theta, 4-8Hz; alpha, 9-121Hz; beta, 13-30Hz) to the model were then evaluated for importance to classifier success and tested as predictors of the antidepressant response. A decline in depression scores by 45.6 percent was observed after one week and this early antidepressant response correlated with a decrease in the SCC LFP beta power, which most contributed to classifier success.
"We generally think of depression treatment as taking weeks to months to show stable and meaningful changes in core clinical features of the illness," said Dr. Mayberg. "This study shows reproducible and consistent changes in a brain readout over the first minutes of optimized stimulation in the operating room in individual patients. This provides new mechanistic understanding of the 'depression switch' that moves a patient from a state of sustained mental pain and immobility to relief and the renewed capacity to move and engage."
"This research provides individuals who have struggled with depression a sense of hope through advancements in existing technology," said John Ngai, PhD, Director of the NIH BRAIN Initiative. "We are making immense strides in better understanding debilitating brain and mental health conditions through these discoveries and look forward to seeing how deep-brain stimulation will continue to improve people's lives."
Studies that continue to track these brain state biomarkers during ongoing DBS therapy are ongoing at the Nash Family Center for Advanced Therapeutics at Mount Sinai West in New York. Phase II of this 5-year NIH BRAIN Initiative grant is currently recruiting new subjects.
Source and top image: Mount Sinai