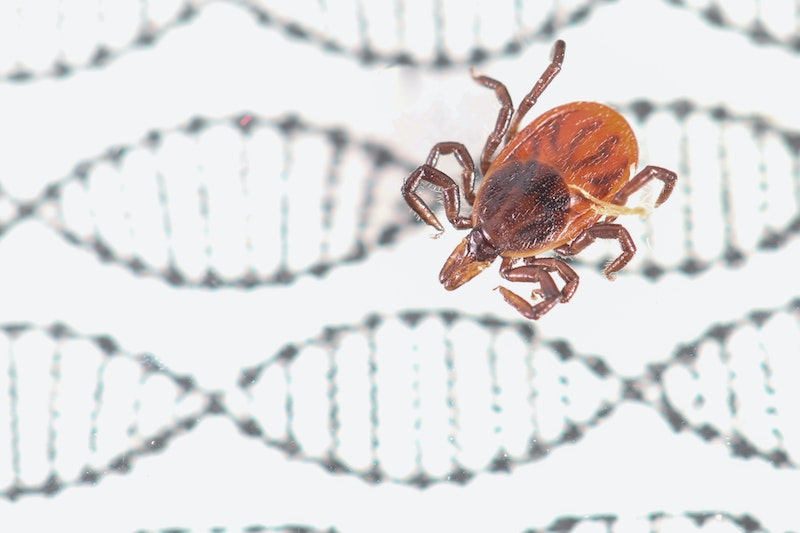 Reducing tick-borne diseases, such as Lyme disease, may now be possible thanks to two new gene editing methods developed by researchers at Penn State; the University of Nevada, Reno; and the University of Maryland. The methods could allow scientists to alter parts of the tick genome that are involved in harboring and transmitting pathogens.
"In the United States, alone, ticks infect approximately 300,000 people with Lyme disease each year, and if left untreated, the infection can spread to joints, the heart and the nervous system," said Jason Rasgon, professor of entomology and disease epidemiology, Penn State. "Currently, there is no vaccine, and existing treatments are not always fully effective."
Rasgon noted that the problem is getting worse, as climate change is allowing ticks to rapidly invade new areas, putting even more people and animals at risk of infections.
"Ticks are a formidable foe to public health," said Rasgon. "We are in desperate need of new tools to fight ticks and the pathogens they spread."
The team's new gene editing tools use the CRISPR/Cas9 system, which comprises a Cas9 enzyme that cuts DNA at a specific location on the genome so that bits of DNA can be added or removed and a guide RNA that directs the Cas9 to the right part of the genome. Gene editing by CRISPR/Cas9 is normally performed by injecting this gene editing complex into embryos but injecting this complex into tick eggs had been impossible until now. For further information see the IDTechEx report on Synthetic Biology 2018.
"For many years, people thought it would be impossible to make a transgenic tick because tick eggs are coated in a hard wax that shattered the delicate glass needles used for injections," said Rasgon.
The University of Nevada, Reno, team — led by Monika Gulia-Nuss, assistant professor of biochemistry and molecular biology — circumvented this problem by removing the maternal organs that make the wax prior to the ticks laying their eggs. This resulted in eggs that could be injected. The team was then able to inject the CRISPR/Cas9 complex and successfully make deletions in two different genes.
The team then took the process a step further by injecting the CRISPR/Cas9 complex directly into the mothers and used Rasgon's patent-pending CRISPR technology — developed at Penn State — to target it to the mothers' ovaries. Rasgon had already demonstrated the process, called ReMOT Control, to be successful in several insects, including beetles, flies, whiteflies and mosquitoes. In his previous research with ReMOT Control, Rasgon identified a small peptide — a molecule that is similar to a protein but smaller — that binds to receptors on the ovaries of most insect species.
In the new research, the team showed that this peptide is functional in ticks. They fused the peptide to Cas9 and injected it into pregnant adult female ticks. The peptide successfully delivered the Cas9 into the developing ovaries, where the complex could then edit the genome of the offspring. The team observed a similar gene editing efficiency in both embryo injections (14%) and ReMOT Control (11.7%) when applied to a gene, called ProbB, suggesting that either method is suitable for tick gene editing.
"The ReMOT Control protocol was just as efficient as embryo injection and significantly easier," said Rasgon.
Gene editing efficiency, explained Rasgon, refers to the frequency of indels — or insertion/deletion mutations — that occur as a result of editing. It is a measure of the extent to which the gene editing procedure alters the gene. According to Gulia-Nuss, the study is the first to demonstrate genetic modification in ticks.
Rasgon added, "The methods can be used to develop new control methods for diseases, such as Lyme disease, and also to further understand the biology of ticks."
Source: Penn State University
Top image: University of Maryland