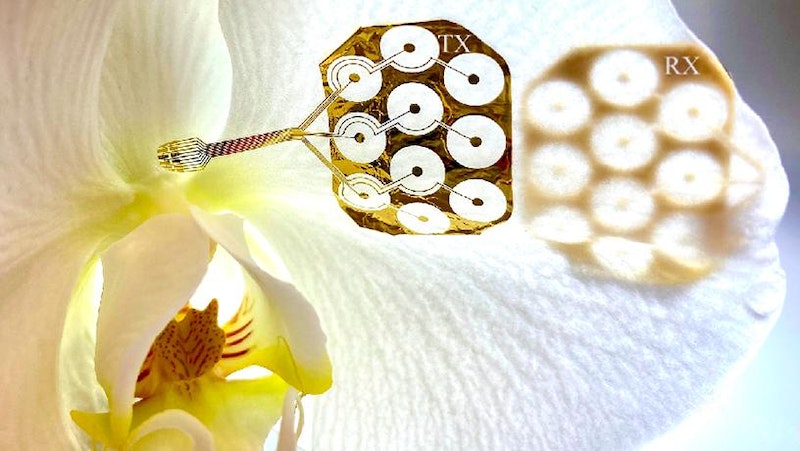 Implantable bioelectronics are now often key in assisting or monitoring the heart, brain, and other vital organs, but they often lack a safe, reliable way of transmitting their data to doctors. Now researchers at Columbia Engineering have invented a way to augment implantable bioelectronics with simple, high-speed, low-power wireless data links using ions, positively or negatively charged atoms that are naturally available in the body.
Implantable bioelectronics are increasingly playing key roles in healthcare. For example, pacemakers can help ensure that a patient's heart maintains a healthy beat, and neural interface devices can assist patients with epilepsy and other disorders by stimulating specific brain regions to reduce their neurological symptoms, or even link a paralyzed patient's brain with robotic limbs. However, one major challenge that implanted bioelectronics face is how to communicate their data through the body to external devices for further analysis and diagnostics by physicians and scientists. For further information see the IDTechEx report on Bioelectronic Medicine 2019-2029.
"From brain or muscle activity to hormone concentrations, these data need to be transmitted so that they can undergo advanced processing and review by experts before medical decision-making occurs," said study co-senior author Dion Khodagholy, an associate professor of electrical engineering at Columbia University.
"This is especially important for conditions where there can be substantial fluctuations over time, such as in epilepsy or movement disorders," added study co-senior author Jennifer Gelinas, an assistant professor of neurology at Columbia University Irving Medical Center. "One example of this is the NeuroPace device for epilepsy—the data from it needs to be downloaded for the clinician to adjust its stimulation protocols to better treat seizures."
Although cables offer a simple way to quickly transmit data from implants to outside machines, the way they penetrate tissue limits their long-term use. At the same time, conventional wireless approaches using radio waves or visible light often do a poor job penetrating biological tissue.
"Safe, effective, long-term wireless communications with implanted devices is still lacking," Khodagholy said.

Making use of the body's ions

An intriguing strategy that bioelectronics could use for communications is one the body often uses—ions. Inside the body, cells regularly shuffle ions around to communicate with each other. Now Khodagholy and his colleagues have developed a way to use the body's ions to transmit data at megahertz rates—that is, millions of bits per second. Their study, "Ionic communication for implantable bioelectronics," appears in the journal Science Advances.
The way in which living tissues are rich with ions means they store electrical potential energy, much as electric batteries do. The new technique, dubbed ionic communication, leverages this fact to help implanted bioelectronics exchange data with external devices.
Ionic communication involves one pair of electrodes implanted inside a tissue, and another pair of electrodes resting on the surface of that tissue. The implanted device encodes data in alternating electric pulses that store energy within the tissue. In turn, the surface receiver can detect this energy and decode it. In the new study, the researchers detailed what geometric properties govern the depths to which ionic communication might reach inside the body, as well as strategies to establish multiple parallel lines of communication between electrodes. They found ionic communication was capable of transmitting data across distances that could help it target a variety of tissue types, from human skin to visceral organs.
"Ionic communication is a biologically based form of data communication that establishes long-term, high-fidelity interactions across intact tissue," Khodagholy said.
In experiments, the scientists created a fully implantable neural interface using ionic communication for rats. They showed it could acquire and non-invasively transmit brain data from freely moving rodents over the span of weeks with enough stability to isolate signals from individual neurons. Using 10 communications lines with currently available commercial electronics, the scientists achieved communications rates of 60 megahertz. They estimated that a single ionic communications line could potentially achieve communication rates of up to 14 megahertz.
The scientists note that ionic communication required low voltages and substantially less power than radio or ultrasound communications. Their experiments also revealed their ionic communication device proved thousands to millions of times more energy-efficient at communicating data than other approaches used with implantable bioelectronics.
Ionic communications devices can be made from materials that are soft, flexible, commercially available, biocompatible—that is, not harmful to living tissues—and even biodegradable, suggesting they could readily find use in practical implantable devices that can dissolve away once they are no longer needed. Khodagholy and his colleagues now aim to combine ionic communication with organic transistors in an implantable biosensor.
This latest work continues Khodagholy's overall research seeking to connect bioelectronic devices with the human brain. For example, he and his colleagues recently developed a material that helps ionic signals conduct only in specific chosen directions. This can help scientists develop circuitry that uses ions instead of electrons in order to better interface with the body. Such circuits would ordinarily not work if ions could travel in all directions and cause unwanted interference between different parts of each circuit. The new "anisotropic ion conductor" is a soft, biocompatible composite material, suggesting it could prove useful in implantable bioelectronics, and the processes to synthesize it are straightforward and scalable.
"The novel material we developed has unique properties that enable the implementation of large-scale organic bioelectronic devices, which can enhance their translation to human health applications," Khodagholy said. "Next, we aim to design compact and complex anisotropic-ion-conductor-based integrated circuits composed of many organic transistors for bioelectronics applications."
Source and top image: University of Columbia