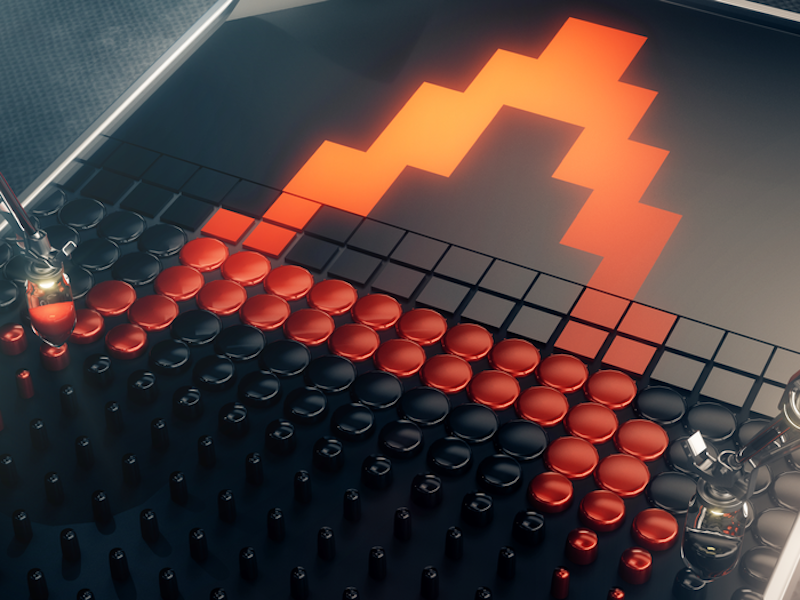 Borrowing a technique from inkjet printers, researchers at Princeton Engineering have rolled out a pixel-by-pixel method to program and manufacture soft structures for use in robotics, biomedical devices or architectural features. The new technique creates pixelated sheets of soft material as easily as pressing a button. Each pixel can be programmed uniquely to create composite shapes, colors and mechanical abilities. And it works with a class of materials — curable elastic polymers — that cannot be printed with conventional inkjets or 3D printers.
"The selling point here is the simplicity of the methodology. All you need are two plates with a bunch of holes," said Pierre Thomas Brun, assistant professor of chemical and biological engineering. The materials start as fluids that cure into solids once they are deposited. The key is in how the fluids flow as they set. A deep understanding of this behavior led Brun's team to fabricate these composite materials without using complicated machinery. Instead, they let nature do the work.
Brun said the new approach, which applies age-old fluid dynamics to a modern materials problem, keeps costs low without cutting corners. "You will get a structure that is very precise," he said. "This frugal approach is not a compromise on the quality."
The pixels in an inkjet printer use four droplet colors to create millions of apparent hues. Depending how they are arranged on the paper, these dots can be made into myriad shapes, from simple letters to elaborate trees. For further information see the IDTechEx report on 3D Electronics/Additive Electronics 2022-2032.
Scientists have wanted to do something similar with soft composite materials. "If you want a material that interacts well with humans, you want it to be soft," Brun said. But the gooey liquids that cure into elastic solids have proven too viscous for inkjets and too pliant for 3D printers. The new approach finds a way to work with the inherent properties of curable elastic polymers, such as silicone rubber, and could be extended to work with some liquid metals and molten glass.
"This simple and versatile technique opens many paths to develop 'soft-robotic' devices, at least for fast prototyping," said José Bico, a physicist at ESPCI-Paris, who was not involved in the research. "Sometimes you think you need to make very complicated things," Bico added, "but what works in practice are very simple things."
When you put a straw into a glass of water and the water rises through the straw, that's due to capillary action, in which liquid flows into a narrow space. In this case, that narrow space is a thin layer between two acrylic plates. When the researchers dropped a sample liquid into holes in the top plate, it seeped into the space between the plates in mathematically predictable ways. The liquids spread and eventually came in contact with each other, forming the edge of each pixel. Because of their honey-like viscosity, the pixels didn't mix. Moreover, without air between them, the liquids essentially zipped together to create geometric features, Brun said. The material then cured into a solid in a few minutes at ambient temperatures, creating a sheet of soft-pixelated elastic.
As their proof of concept, the researchers used color to make a variety of composite images — a Princeton-themed "P" and a figure inspired by Space Invaders, the pioneering arcade game. The same principle can be applied to pixels with varied mechanical or magnetic properties, leading to vast new applications in soft robotics, medical devices and beyond.
"You could easily pick a region where you add magnetic particles so that when the sheet is composed, it has regions that could be actuated with magnets," said co-author Christopher Ushay, a Ph.D. candidate in Brun's lab.
To determine where to put the holes in creating a design, they borrowed a mathematical trick from image analysis called watershed transform. Imagine river basins on a topographic map: If you flood the area, which river basin will the water run into? Researchers used the same idea to determine where the polymers would flow before they came in contact. But because they were using polymers with different viscosities, they flow at different rates. "This is taking the watershed transform a little bit farther," Ushay said. "You're no longer doing a transform with respect to space, but also with respect to time."
The researchers were able to create different patterns, called Voronoi tessellations, depending on how many holes they used and the spacing between them. For example, by using four holes, they could create square patterns, and using six sources, they could create triangles.
"The surprising thing here is how well it works," Brun said. "If we don't start in a perfectly synchronized way, you'd think we'd get a slightly crooked pattern. But this is not the case. Things manage to catch up. This is very important for the robustness of the approach."
Future research will look at how to stack the thin pixelated sheets to created voxels, or volumetric pixels. "We're obtaining these very thin sheets," Brun said. "But we're made of 3D materials."
The National Science Foundation was one of the funders of the work, as part of an effort to find ecological approaches to manufacturing, Brun said. By taking advantage of natural properties, this technology requires less energy because it can be performed at room temperature and needs no specific building to be designed to operate it.
The technique could also be scaled up for architectural structures such as bridges and arches or scaled down to apply to microscopic structures.
Source and top image: Princeton University