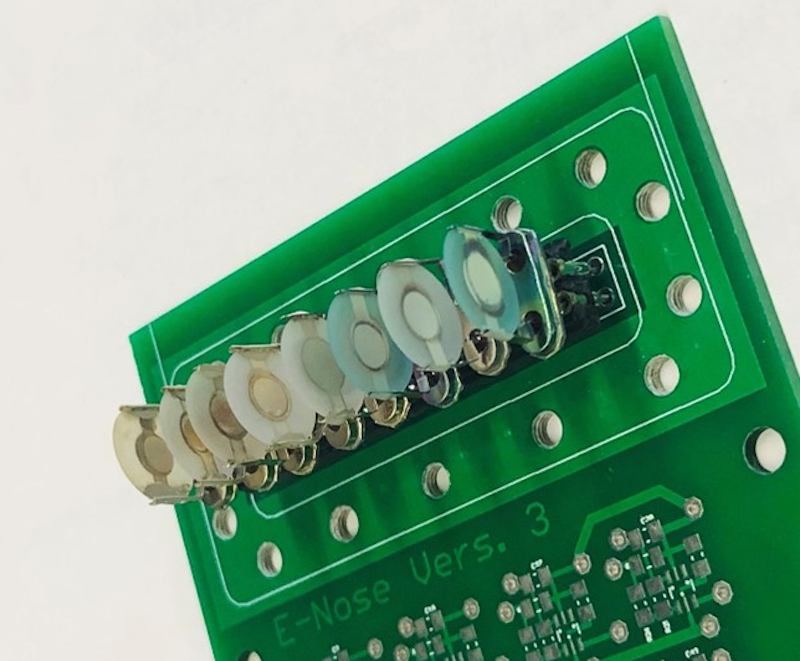 As paint thinner, ink and adhesives dry, they can release volatile organic compounds (VOCs), which can negatively impact health. Typically, one of those VOCs is xylene, which exists as three isomers with the same elements but slightly different arrangements. Because the isomers are so similar, they're hard to monitor separately. Now, researchers reporting in ACS Sensors have developed an electric nose (e-nose) with porous metal-organic framework (MOF) films that can accurately distinguish xylene isomer mixtures.
Xylene, sometimes called xylol, is harmful if large amounts are inhaled or absorbed through skin. Each isomer, o-xylene, m-xylene and p-xylene, interacts differently in humans and other mammals, so it's important to monitor the environment for each isomer and not just their cumulative presence. Previously, researchers used gas chromatography analysis to identify the three forms of xylene. But this procedure requires large instruments that are expensive, and the analyses are time intensive. So, Lars Heinke and colleagues wanted to see if MOF films could be incorporated into simple, faster sensors to detect and measure the presence of each isomer separately in the air. For further information see the IDTechEx report on Gas Sensors 2022-2032: Technology, Opportunities, Players, and Forecasts.
The researchers prepared six different porous MOF films known to adsorb xylene isomers and applied them to gravimetric sensors in an array called an "e-nose." In initial experiments, the team showed that the MOF films had different sensitivities to o-xylene, m-xylene and p-xylene. Then, they tested the e-nose's ability to distinguish xylene isomers within mixtures at concentrations of 10 ppm and 100 ppm, which is the U.S. National Institute for Occupational Safety and Health's exposure limit. By analyzing the sensor array data with a machine learning algorithm, the team could determine the composition of the mixtures with 86% accuracy for the 10-ppm mixture and 96% accuracy for the 100-ppm mixture. The researchers say that the MOF-based e-nose is a simple device for discriminating the three forms of xylene in environmental monitoring and diagnostic health testing.
Source and top image: American Chemical Society