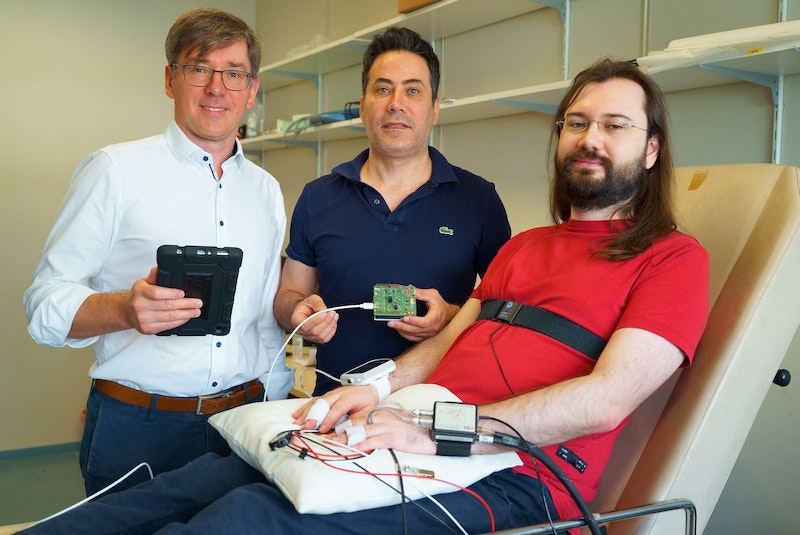 Vagus nerve stimulation of the auricle (aVNS for short) is used to treat chronic diseases that affect an entire organ system. Examples include pain therapy, but also the treatment of depression or circulatory disorders. In this minimally invasive therapy, only the sensory nerve endings in the auricle are stimulated, thereby also triggering anti-inflammatory processes. Eugenijus Kaniusas and his team have already been able to show several times that this new method works and has a therapeutic value. The research team recently published their latest study results in the scientific journal "Frontiers in Physiology".
When a virus - such as SARS-CoV-2 - triggers an inflammatory response in the body, this information is transmitted to the brain via the sensory nervous system. The Vagus nerve, which extends from the brain to most organs in the human body, responds in a regulatory way with an anti-inflammatory reflex. However, if the anti-inflammatory response is too weak, an excessive inflammation may negatively affect the body's own regeneration. To restore the balance between the initially protective inflammatory response and the regenerative processes, aVNS systems can be used. For further information see the IDTechEx report on Bioelectronic Medicine 2019-2029.
To test their hypothesis that aVNS also supports the healing process in severe Covid-19 cases, TU researchers worked closely with the Hospital Favoriten, the Medical University of Vienna, the Health Service Centre of the Vienna Private Clinic, the Sigmund Freud Private University Vienna and the Immunological Day Clinic Vienna.
In its most recent study, the research team was able to show that the positive effect that Vagus nerve stimulation has on the course of severe Corona diseases, which was already predicted in 2020 - at the beginning of the pandemic - actually exists. For this purpose, the team investigated the use of aVNS on patients who were acutely ill with Corona and were about to receive artificial respiration.
When the virus attacks the body, the inflammatory response and healing process can become unbalanced. The inflammatory response of the body then causes more damage than the virus itself. This balance must be restored - for example, by using an aVNS system. "The electrostimulation of the auricular vagus nerve was not only able to stop the inflammatory reaction in Covid-19 patients, it was even able to counteract it," Eugenijus Kaniusas, professor at the Institute for Biomedical Electronics at TU Wien, emphasises the result.
The therapeutic success of aVNS also increases by adapting the system. If an aVNS system constantly sends electrical impulses, this can lead to side effects such as pain. The power consumption is also significantly higher compared to when the system reacts individually to the patient and sends targeted stimuli. To realise this, the researchers around PhD student Babak Dabiri have integrated a closed-loop control. Eugenijus Kaniusas explains: "This allows us to stimulate the Vagus nerve exactly when the brain is listening. This is the case when the heart is contracting and blood is flowing into the vessels or when the person is exhaling." In this way, over- and under-stimulation can be prevented, which often results from persistent aVNS.
While simple measurements refer exclusively to the past, Kaniusas and his team worked with predictions: "In the study, we were able to show that predictive stimulation works and leads to the desired result. This was possible due to a feedback function of the system, via which the aVNS system can constructively interfere with the parasympathetic system," the electrical engineer Kaniusas says. "The aVNS system listens to the measured biosignals and sends its stimulus at exactly the right time, like an intelligent electric pill," he finally draws a comparison. This is an important step in the direction of personalisation, through which the research team also expects better therapeutic success and more acceptance by users.
Source and top image: TU Wien