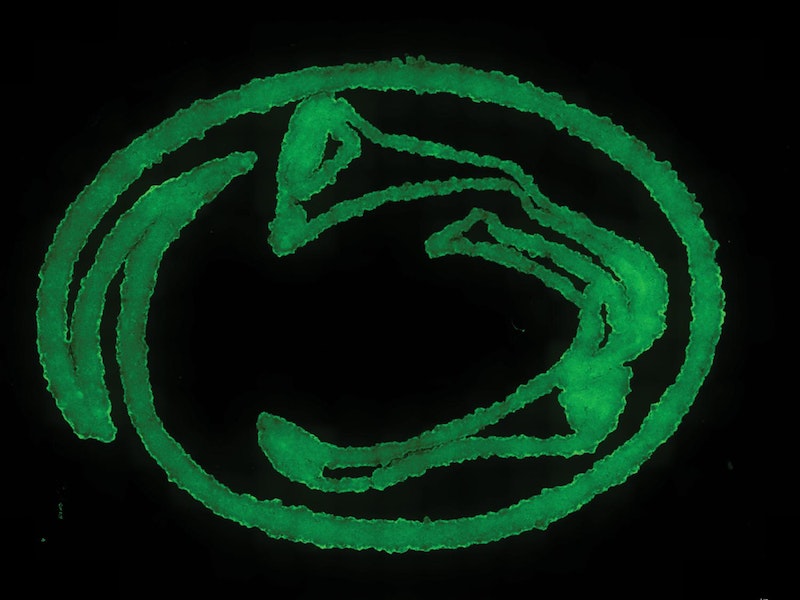 Every day in the United States, 17 people die waiting for an organ transplant, and every nine minutes, another person is added to the transplant waiting list, according to the Health Resources and Services Administration. One potential solution to alleviate the shortage is to develop biomaterials that can be three-dimensionally (3D) printed as complex organ shapes, capable of hosting cells and forming tissues. Attempts so far, though, have fallen short, with the so-called bulk hydrogel bioinks failing to integrate into the body properly and support cells in thick tissue constructs.
Now, Penn State researchers have developed a novel nanoengineered granular hydrogel bioink that makes use of self-assembling nanoparticles and hydrogel microparticles, or microgels, to achieve previously unattained levels of porosity, shape fidelity and cell integration. The team published their approach in the journal Small.
"We have developed a novel granular hydrogel bioink for the 3D-extrusion bioprinting of tissue engineering microporous scaffolds," said corresponding author Amir Sheikhi, Penn State assistant professor of chemical engineering who has a courtesy appointment in biomedical engineering. "We have overcome the previous limitations of 3D bioprinting granular hydrogels by reversibly binding the microgels using nanoparticles that self-assemble. This enables the fabrication of granular hydrogel bioink with well-preserved microporosity, enhanced printability and shape fidelity."
To date, the majority of bioinks have been based on bulk hydrogels — polymer networks that can hold a large amount of water while maintaining their structure — with nanoscale pores that limit cell-cell and cell-matrix interactions as well as oxygen and nutrient transfer. They also require degradation and/or remodeling to allow cell infiltration and migration, delaying or inhibiting bioink-tissue integration. For further information see the IDTechEx report on 3D Bioprinting 2018 - 2028: Technologies, Markets, Forecasts.
"The main limitation of 3D bioprinting using conventional bulk hydrogel bioinks is the trade-off between shape fidelity and cell viability, which is regulated by hydrogel stiffness and porosity," Sheikhi said. "Increasing the hydrogel stiffness improves the construct shape fidelity, but it also reduces porosity, compromising cell viability."
To overcome this issue, scientists in the field began using microgels to assemble tissue-engineering scaffolds. In contrast to the bulk hydrogels, these granular hydrogel scaffolds were able to form 3D constructs in situ, regulate the porosity of the created structures and decouple the stiffness of hydrogels from the porosity. Cell viability and migration remained an issue, however, Sheikhi said. To attain the positive traits during the 3D printing process, granular hydrogels must be tightly packed together, compromising the space among microgels and negatively impacting the porosity, which in turn negatively impacts cell viability and motility.
The Penn State researchers' approach addresses the "jamming" issue while still maintaining the positive traits of the granular hydrogels by increasing the stickiness of microgels to each other. The microgels cling to each other, removing the need for tight packing as a result of interfacial self-assembly of nanoparticles adsorbed to microgels and preserving microscale pores.
"Our work is based on the premise that nanoparticles can adsorb onto polymeric microgel surfaces and reversibly adhere the microgels to each other, while not filling the pores among the microgels," Sheikhi said. "The reversible adhesion mechanism is based on heterogeneously charged nanoparticles that can impart dynamic bonding to loosely packed microgels. Such dynamic bonds may form or break upon release or exertion of shear force, enabling the 3D bioprintability of microgel suspensions without densely packing them."
The researchers say that this technology may be expanded to other granular platforms made up of synthetic, natural or hybrid polymeric microgels, which may be assembled to each other using similar nanoparticles or other physical and/or chemical methods, such as charge-induced reversible binding, host-guest interactions or dynamic covalent bonds. According to Sheikhi, the researchers plan to explore how the nanoengineered granular bioink could be further applied for tissue engineering and regeneration, organ/tissue/disease models-on-a-chip, and in situ 3D bioprinting of organs.
"By addressing one of the persistent challenges in the 3D bioprinting of granular hydrogels, our work could open new avenues in tissue engineering and printing functional organs," Sheikhi said.
Source and top image: Penn State University