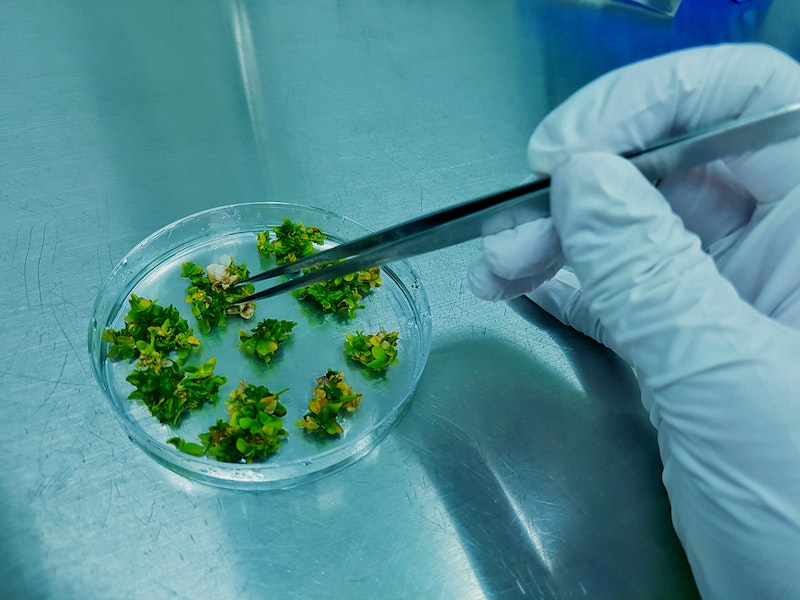 Humans have been manipulating the DNA of the organisms around us in agriculture for thousands of years, using selective breeding to create sweeter fruit, hardier grains, cows that produce more milk, and many more valuable traits. Most common crops today bear little resemblance to their wild ancestors - for example, modern corn is 1,000 times larger than it was 9,000 years ago, with three times as much sugar.
Over the last few decades, scientists have sought to improve upon traditional crop breeding by developing a range of techniques that can be used to alter genetic material in order to produce crops with improved qualities, such as larger yields, improved drought tolerance and better resistance to pests.
The commercialisation of transgenic, or "genetically modified (GM)", crops in the 1990s was a major milestone for agricultural biotechnology. The process involves taking a gene from one species and implanting it into another in order to introduce a desirable trait. One of the most well-known examples of this is Bt corn, where a gene for producing insect-killing Cry proteins was taken from soil bacteria and introduced into corn plants, creating an insect resistant crop that required less pesticides to grow successfully.
In some ways, transgenic crops have been extremely successful. Since GM crops were first planted in the USA in 1996, their production has increased dramatically, to the point where more than 90% of all soybean, cotton and corn acreage in the USA is now used to grow genetically engineered crops. A 2014 meta-analysis found that using GM crops can improve yields by 22%, reduce chemical pesticide use by 37% and increase farmer profits by 68% on an average farm.
Despite this, the picture is not all bright for transgenic crops. GM crops have been extremely controversial over the last few decades, with environmental groups like Greenpeace being especially vocal in their opposition to them. This, alongside widespread consumer hostility has led to many governments creating harsh regulatory environments, where getting a new GM crop approved is extremely costly and time-consuming. Europe is an extreme example of this, to the extent where it is essentially impossible to get a GM crop approved in the EU.
This, alongside the technical barriers, has led to GM crops being very expensive to develop. A study in 2011 found that it costs an average of $136 million to develop and commercialise a new plant biotechnology trait, with the process taking an average of 13 years. These extremely high barriers to commercialisation mean that only companies capable of investing hundreds of millions of dollars have been able to develop transgenic crops. This has created a highly consolidated market, where four players control over 60% of the global industry: Bayer, BASF, Syngenta (now owned by ChemChina) and Corteva Agriscience, the spin-off company created following the DowDuPont demerger.

A comparison of genetic engineering techniques. Source: IDTechEx Research, Crop Biotechnology 2020-2030
However, this could be all set to change. In recent years, the rapid development of gene editing technologies has led to a surge of interest in how they could be applied in agriculture. Gene editing techniques, such as CRISPR-Cas9 are much cheaper and quicker to implement than transgenic technologies. As well as this, several countries, including the USA, have signalled that they do not intend to regulate gene edited crops, as the process does not involve introducing any foreign DNA into the final product and most changes to the DNA could, in theory, happen naturally anyway. By removing many of the barriers around crop biotechnology, there are hopes that gene editing techniques like CRISPR could "democratise" agriculture, creating a more competitive and start-up friendly environment, accelerating the pace of innovation in what has become an increasingly stagnant market in recent years.
"Crop Biotechnology 2020-2030", the recent report by IDTechEx, explores the tools and techniques used in crop biotechnology, providing a market outlook and evaluating whether gene editing really is the future of agriculture.
For more information on this report, please visit www.IDTechEx.com/CropBio or for the full portfolio of Food & AgTech research available from IDTechEx please visit www.IDTechEx.com/Research.
IDTechEx guides your strategic business decisions through its Research, Consultancy and Event products, helping you profit from emerging technologies. For more information on IDTechEx Research and Consultancy, contact research@IDTechEx.com or visit www.IDTechEx.com.