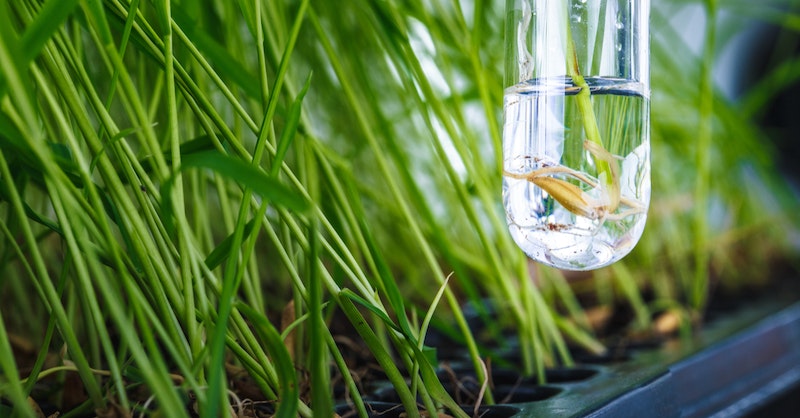 21st century agriculture is facing some major challenges. The global population is projected to increase to 10 billion by 2050. Feeding this many people will require a 70% increase from today's global food production. However, available agricultural land is in short supply, with climate change and growing urbanization causing available arable land to decrease. The search for more land for agriculture is leading to deforestation, greenhouse gas emissions and a loss of biodiversity.
Feeding a growing population without being able to expand agricultural land will require increases in agricultural productivity. However, major crop yields have been plateauing over the last few decades and concerns over the use of synthetic pesticides and artificial fertilizers is leading to more and more tools being stripped away from farmers looking to boost their crop yields.
A potential solution to these challenges is through genetics. By manipulating the genomes of crops, it is possible to make crops larger, improve resilience to environmental stresses and give plants an innate resistance to certain diseases. In a sense, humans have been manipulating the DNA of crops for thousands of years through selective breeding, although the pace has increased significantly as new genetic engineering technologies have emerged. The recent IDTechEx report, "Genetic Technologies in Agriculture 2020-2030: Forecasts, Markets, Technologies", explores the use of genetic technologies within agriculture and the impact that they are having on global farming.

The range of genetic technologies used in agriculture. Image source: IDTechEx report, "Genetic Technologies in Agriculture 2020-2030: Forecasts, Markets, Technologies"
Genetic engineering as a tool for agriculture first emerged in the 1990s, with the creation of "genetically modified organisms" (GMOs). Creating a GMO involves a technique called transgenesis, where a segment of DNA is taken from one organism and spliced into genetic code of another. An example of this is the development of Bt corn, where the gene for producing an insecticidal protein was taken from a soil bacterium and placed into corn plants, creating a corn crop that can protect itself from insects.
GMOs have been very successful in certain areas, for example over 95% of corn grown in the US is currently genetically modified. However, there are challenges. Creating a GMO is incredibly expensive, costing hundreds of millions of dollars, with regulatory approval taking decades, if the crop is even approved at all - getting a GMO approved in the EU is almost impossible, for example. Additionally, GMOs have faced a hostile public backlash, which has limited their uptake in much of the world and led to harsh regulatory regimes in many places, particularly in the EU.
An emerging technology that could be set to revolutionize the use of genetic engineering in agriculture is the field of genome editing. Unlike transgenics, which involves the insertion of whole DNA sequences into a genome, genome editing involves making precise changes to an organism's native DNA, effectively making small corrections to the DNA that was already there.
Modern genome editing technique involve using enzymes to cut DNA strands at a precise point in the sequence, creating a "double stranded break" that is then repaired by the cell, leading to a change in the genome. There are currently three main genome editing techniques, zinc finger nucleases (ZFNs), transcription-activator like effector nucleases (TALENs) and the clustered regularly interspaced palindromic repeats (CRISPR) system, each with its own advantages and disadvantages.
Genome editing could be tremendously useful in agriculture. It can be used to silence undesirable genes in crops, such as the genes responsible for browning in mushrooms, and to alter the behavior of other genes, e.g. causing an increase in fruit size or yield, or stimulating the production of useful natural products. Unlike transgenics, genome editing is much quicker and cheaper to perform and the technique itself is much more precise, increasing the success rate of new engineered crops. Because it relies on changing the organism's native genome rather than inserting foreign DNA, gene editing companies are hoping that genome edited crops avoid the "Frankenfoods" label and consumer backlash associated with GMOs.

Image source: IDTechEx report, "Genetic Technologies in Agriculture 2020-2030: Forecasts, Markets, Technologies"
For the same reason, gene editing may avoid many of the regulatory hurdles facing GMOs. For example, in 2016, the US Department of Agriculture (USDA) decided that a mushroom edited using CRISPR to resist browning fell outside its regulatory oversight. Similarly, plants modified with ZFNs and TALENs are also escaping USDA GMO scrutiny. However, given how young the field is, the regulations can be expected to change rapidly over the coming years.
In 2019, American biotech company Calyxt announced the first commercial launch of a product derived from a gene edited crop, its Calyno brand high oleic soybean oil. This oil is designed to be a heart healthy product with increased heat stability, 80% oleic acid, 20% lower saturated fat and zero grams of trans fat per serving. The soybeans were edited using TALEN gene editing licensed from its parent company Cellectis.
Calyxt believes that TALEN technology has several key advantages over other forms of gene editing, including the strong IP position of its parent company. TALEN is both specific and precise and can cleave any selected region in any gene. For example, there are multiple FAD genes in the soybean gene yet the company's TALENs can edit only the two FAD genes that produce fatty acids in the seed. The company introduced a single variety of its high oleic soybeans in the US in 2017. By 2019, Calyxt had contracted over with over 100 Midwestern soybean growers to produce 36,000 acres of its high oleic soybeans, with the company passing 100,000 acres in March 2020. Through its agricultural partners, Calyxt is expecting to have over 25% market share of H0 soybean acres by the end of 2020.
In recent years, there has been particular excitement around CRISPR technology. Although CRISPR is less precise than TALEN, it is quicker, cheaper and doesn't need specific expertise. Unlike ZFN and TALEN, CRISPR uses sgRNAs to identify DNA sequences, rather than engineered proteins, which are far easier to produce. Although no CRISPR-edited crops have yet been brought to market, this is expected to soon change, with Corteva Agriscience developing a CRISPR-edited waxy corn hybrid that is set to see commercial release in the US within the next year.
"Genetic Technologies in Agriculture 2020-2030: Forecasts, Markets, Technologies" is a recent report by IDTechEx that explores the technology and market factors involved in shaping the industries around genetic engineering in agriculture. The report also discusses the impacts of regulations on the industry and provides a 10 forecast for the growth of the industry.
For more information on this report, please visit www.IDTechEx.com/CropBio or for the full portfolio of Food & AgTech research available from IDTechEx please visit www.IDTechEx.com/research/AgTech.
IDTechEx guides your strategic business decisions through its Research, Consultancy and Event products, helping you profit from emerging technologies. For more information on IDTechEx Research and Consultancy, contact research@IDTechEx.com or visit www.IDTechEx.com.