European Commission's Horizon 2020 SME (small-medium sized enterprises) Instrument recently announced Sensars Neuroprosthetics as a Phase 1 recipient for funding of their SENSY technology. Phase 1 recipients receive €50000 in funding for 6 months to execute a feasibility study and draft a 10-page business proposal. This is intended to bring the technology from the idea to concept stage. There are currently 2813 participants, 2750 projects coordinated, and 1094,87M€ allocated to the Horizon 2020 SME Instrument. 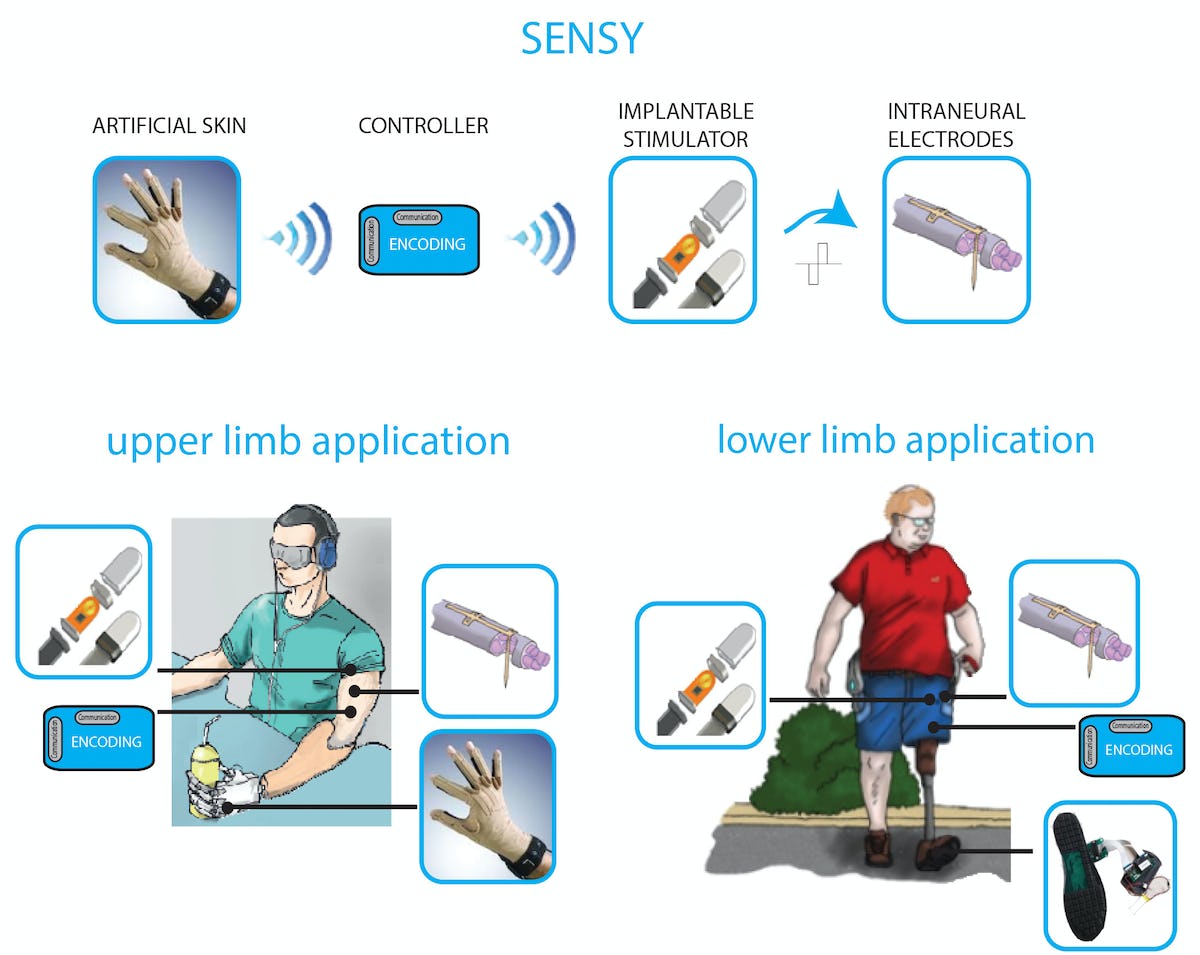 Source: SenSars
Sensars is a spin-off from the Ecole Polytechnique Federale de Lausanne in Switzerland founded by Drs Francesco Petrini, Stanisa Paspopovic and Silvestro Micera. The SENSY technology is particularly interesting because it allows amputees not only volitional control of their prosthetic, but also a restored sense of touch. This sensation of touch has been highlighted by other researchers at Case Western, for example, as necessary for the performance of more delicate or fine-tuned motor tasks. The SENSY technology features two major components. First, an intraneural electrode that provides sensory stimulation to the remaining peripheral afferent nerves in the limb. A second, implantable stimulator is in wireless, bidirectional communication between the intraneural electrodes and sensors in the prosthesis. Sensars illustrates on their website how this technology may benefit both arm and leg amputees, which is particularly important because in some regions like the US for example, foot/leg amputees make up nearly 90% of all amputations (and over 60000 cases/year). Incorporation of sensory feedback for these users may also be particularly useful for navigating and adjusting to uneven terrain.
Neuroprosthetic limbs are a topic that has gained global attention over the years with a handful of other players in this space. Based out of Iceland, Ossur for example, released information in 2015 detailing an IMES (implanted myoelectric sensor) technology that similarly wirelessly transmits information from the remaining limb to allow real-time movement of the prosthetic. This particular sensor technology was provided by the Alfred Mann Foundation, Alfred Mann being the same founder of both Second Sight Medical Products (develops retinal implants) and Advanced Bionics (develops cochlear implants). Ossur revealed they had already implanted their technology into two patients for a first-in-human study who have had these implants for over a year with positive feedback on their experience. In the United States, similar projects are also underway for the development of advanced, nerve-integrated prosthetic arms at companies like Ripple Neuro in Utah, and academic institutions like Case Western Reserve University in Ohio.
The price tag attached to these advanced, neuroprosthetic limbs may be one of the initial and more long-term hurdles these devices face in widespread adoption, as Alexis Karandrea highlights in her recently published report for IDTechEx Neuroprosthetics 2018-2028: Technologies, Forecasts, Players. Indeed, the price of EMG-based bionic limbs has been reported to be an inhibitory factor in their uptake, with companies like Open Bionics emerging around 2015 to offer low-cost, 3D printed alternatives for amputees, researchers, and hobbyists alike. Yet other hurdles requiring more immediate attention may exist as well. These include the standard CE and FDA approval processes that necessitate clinical studies of safety and efficacy (which may be particularly costly for invasive, implanted devices), in addition to the circulating security concerns of these devices and how to best protect them from being hacked.
In this emerging field of neuroprosthetic limbs, it is wonderful to see global interest and government support worldwide; and it is exciting to witness the innovative developments that should make for promising products to enhance amputee's mobility and independence. However, the successful navigation of price alongside standard safety and new cybersecurity concerns for these devices may determine who achieves commercialization, making it from bench to bedside, first.
Top image: Sensars